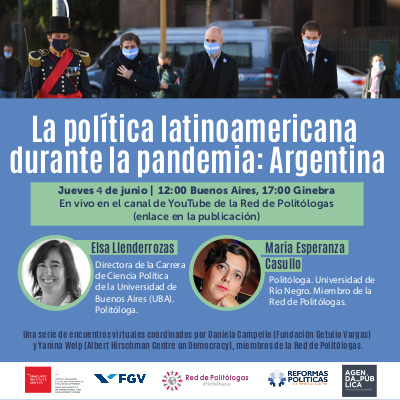 On March 12 with 31 infected people the government suspended flights from all countries in Europe, the United States, South Korea, Japan, China and Iran, and a few days later borders were closed completely. On Thursday 19, March, with 128 cases the state of alert was declared.

Although the president has appeared surrounded by authorities and members of the opposition, all the measures have been taken by Decree. It is an attribution of the president and there are no restrictions to continuing activating it for the state of alarm. The first announces performed a high level of consensus and were based on informal communication between the authorities, while the president stressed that his decisions were taken giving priority to the advice of scientists.

The health system is hybrid, combining public and private unites and even if worst prepared than in most European countries, ranks better than many Latin American ones. Most of the management of the pandemia has been in charge of the public sector.

The confinement has been strict with hard enforcement. In June, despite the measures contagion is spreading in the metropolitan area of Buenos Aires. A criticism emerges from the low number of tests made while the economic emergency is making more and more pressure.

1. Democracy is not at risk

The two experts agree regarding the status of democracy in the country. They do not see a danger of democratic backslide or institutional interruption. The decision-making process is made by the president but in conversation with the governors and mayors and with a strong presence of the expert committee that advises them. Prof. Casullo stresses that Argentina is federal and the sub-national level needs to be taken into account to understand the functioning of politics. Prof. Llenderrozas highlights that the government has competences to legislate with exceptional powers in an emergency such as the current one.

2. Governability is at risk

Even if democracy as a set of institutions is not in danger, the two experts agree on identifying a potential crisis of governability coming from the economic crisis. The GDP drop is estimated at 10% and 50% of the population is falling under the poverty line. The state does not have the capacity to support vulnerable groups in an accurate way and the investment in social aid is not enough to alleviate it.

The greatest tension is observed in the Buenos Aires metropolitan area, which has the highest concentration of poverty and exclusion. It is a Peronist government that has grassroots civil society organizations to contain social pressure but the hardness of the situation is exceptional.

Prof. Llenderrozas stresses that two-thirds of adults receive state aid (21 million people, before they were 17 million) asking how can be the economy reactivated under this pressure.

3. Polarization (‘la grieta’, as named in the country) has been temporarily set aside

The crack (grieta) speaks of a fracture between Peronists and anti-Peronists that has characterized with more or less intensity Argentinian politics for a long time and with particular intensity during the Kirchners governments (the husband Nestor first, Cristina after). Now there is a strong nucleus of radical opposition to the measures taken by the government but represented by those who do not govern. Those who are in management positions choose collaboration. The idea of ‘going together’ prevailed, leaving aside disputes and confrontations. The image of those who govern is high, both of the president (peronista) and of the Buenos Aires assistant who is from the opposition party (Cambiemos).

Prof. Llenderrozas suggest that to somehow this is a result of the federal management of resources which creates incentives for provinces and local governments to collaborate in order to access to funding.

Prof. Casullo agrees on observing that coordination is very high at the moment. She thinks that this is part of the exceptional situation and once normal politics are back the political discussion will re-emerges with greater intensity.

4. There is no exit plan to confinement

There is broad social support for quarantine, but also a demand that it be financially compensated. Both experts agree on the value of confinement as the main measure available to prevent contagion, but there is a demand for economic compensation which is creating tension considering the importance of the informal economy in the country. The entrepreneurs are also claiming for subsidies.

The government has concentrated communication, the strategy has been to explain and compare what happens in other countries, particularly in Brazil and the United States. This even generated a diplomatic problem with Chile but has helped to reinforce the idea that in Argentina the sanitarian crisis is well managed. The challenge is to find a way to start opening and to consider particular situations within the country. The exit from confinement is not clear, nor were their adequate measures in certain areas such as education, care, or gender violence. Inequality in access possibilities has deepened, the gap has widened and leaves a deep inequality in the educational field

This crisis arrived when the new government had just taken office. It has helped to provide political capital. However, the economical crisis was evident before the crisis and all the projects are restricted to the renegotiation of the external debt. An agreement is still pending and in such a situation there is no plan, but just an exceptional crisis.

Link to the full event in Spanish:https://youtu.be/A-Tnb7YxvSQ?t=8