MdP Auditorium A1B and on WebEx

The scholarly context for the Pierre du Bois Annual Conference 2022 is a fascinating development in the discipline of history in the last decade: the rising interest in trans- and interimperial histories. These build on studies showing that a single empire’s metropole and colonies need to be empirically and conceptually integrated. In the first decade of the 21 st century, such more contextualized and decentered histories of empire started evolving into trans- and interimperial histories proper. Inspired by an earlier turn to transnational and global histories, respective historians have been critiquing a deeply rooted and ultimately nationally-biased tendency, by many historians of empire, to focus empirical research and even conceptual conclusions on one single empire. The rise of trans- and interimperial histories crystallized by the 2010s―though it was, one may say, predated by older studies of non-European modern empires. While methodologically dissimilar to present trans- and interimperial studies, these studies quasi by necessity paid considerable attention to (often unequal) relationships especially with modern European and American empires.

The fundamental objective of the present conference is to take stock of this fascinating, partly old though mainly new field of historical inquiry as it regards the modern period; to bring together people who work on diverse trans- and interimperial themes, approaches, and geographical areas; and to chart possible future research synergies, prospects, and trajectories.

To this effect, the conference, which will feature a keynote by a preeminent scholar of the Japanese Empire, Louise Young, brings to the Graduate Institute in Geneva about forty participants whose studies involve the Belgian, British, Qing Chinese, French, German, Habsburg, Qajar Iranian, Italian, Japanese, Ottoman, Portuguese, Russian, and US-American empires, and who will speak on themes ranging from methodological and historiographical reflections to regions, labor, economy, settlers and agriculture, war and violence, culture, institutions and knowledge, race, law, and nation(alism)s.

The background note can be found here.

The speakers' biographies can be found here. 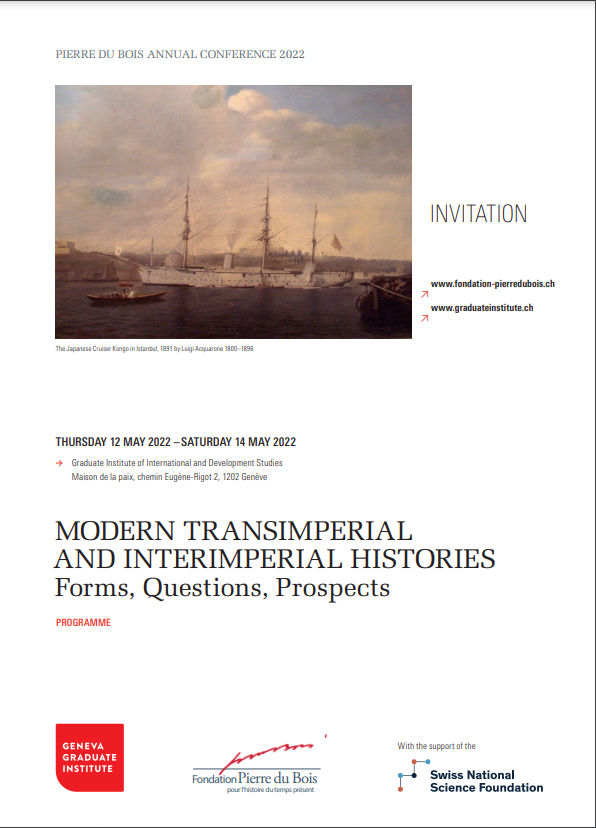 REGISTER TO ATTEND THIS EVENT IN PERSON AT THE GRADUATE INSTITUTE