A World Divided: The Global Struggle for Human Rights in the Age of Nation-States

Eric Weitz, Distinguished Professor of History at City College and the Graduate Centre of the City University of New York

Organised as part of the workshop "Sovereignty, Nationalism and Homogeneity in Europe between the Two World Wars"

Once dominated by vast empires, the world is now divided into close to 200 independent countries with laws and constitutions proclaiming human rights—a transformation that suggests that nation-states and human rights are inextricably entwined.

Through vivid histories drawn from virtually every continent, A World Divided describes how, since the eighteenth century, nationalists have struggled to establish their own states that grant human rights to some people. At the same time, they have excluded others through forced assimilation, ethnic cleansing, or even genocide. From Greek rebels and American settlers, and Brazilian abolitionists in the nineteenth century to anticolonial Africans and Zionists in the twentieth, nationalists have confronted the question:  Who has the “right to have rights?” A World Divided tells these stories in accounts focusing on people who were at the center of events.

In this book presentation, Weitz will focus on the relationship between nation-states, human rights and minority rights, including the creation of minorities, Armenians and Jews in particular. He will argue that minority recognition is always double-edged. While promoted by human rights and minority activists as the path to citizenship and full equality, recognition can also be the source of discrimination and violent attacks.

Eric D. Weitz is Distinguished Professor of History at City College and the Graduate Center, City University of New York. Trained in modern German and European history, Weitz also works in international and global history. His most recent books are, A World Divided: The Global Struggle for Human Rights in the Age of Nation-States (2019) and Weimar Germany: Promise and Tragedy (2007, 2018), both with Princeton University Press. He also edits a book series for Princeton, Human Rights and Crimes against Humanity, and lectures widely in public and academic settings on the history of human rights and genocides and on Weimar Germany.

The lecture will close the first day of the workshop "Sovereignty, Nationalism and Homogeneity in Europe between the Two World Wars" organised as part of the " The Myth of Homogeneity " research project with the collaboration of the Albert Hirschman Centre on Democracy and the support of the Swiss National Science Foundation and the Pierre du Bois Foundation. 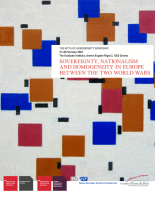