Ecuadorian’s politics in the pandemic

The case of Ecuador was on focus on July 2, 2020, with the participation of Angélica Abad Cisneros (Universidad de Cuenca and Red de Politólogas) y Simón Pachano (FLACSO-Ecuador). 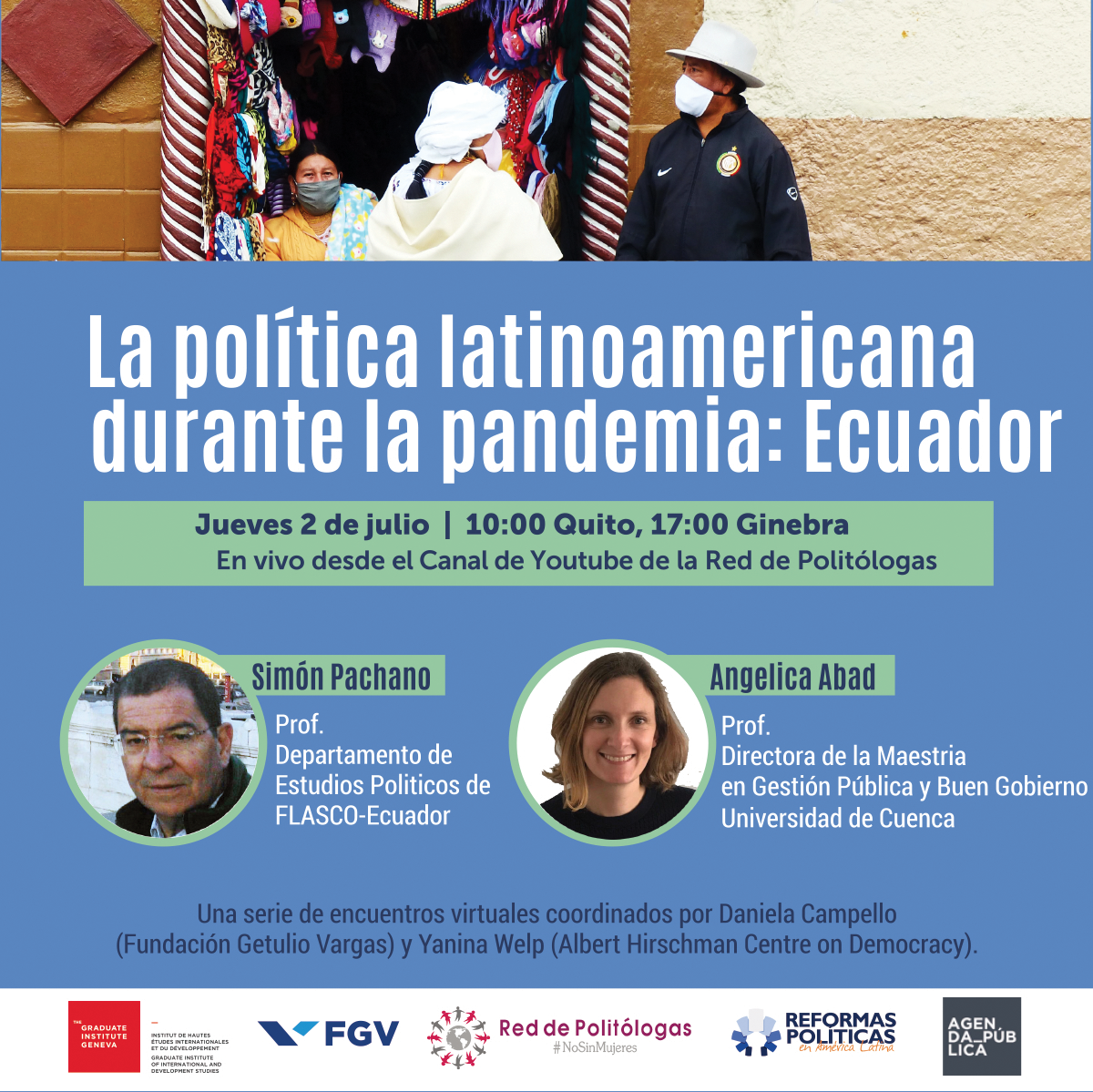 In Ecuador, the 2019 social protests were especially virulent, there were unusual levels of violence for the country and the army was sent to repress. The economic crisis and that caused by the inability to meet payments on external debt were already on the scene before the pandemic. The government is now facing the sanitarian crisis in a situation of extreme political but also technical weakness and with the presidential elections ahead. At the time of the conversation, the health system was at its maximum capacity (although mortality in the sierra is lower than it has been on the coast). The confinement measures are left to the municipalities (which implement levels of confinement or openness in a system of traffic lights determined according to their criteria and data). Communication policies have been inconsistent and disconnected (many voices and contradictions). The arrival of direct monetary transfers to the vulnerable population is one of the few elements that is positively evaluated. The scholars in the seminar agree in observing risks of democratic backsliding in the country.

1. A weak political and technical government that transfers responsibilities to the municipalities

The first infected with covid 19 was detected on February 29, from a person who came from Spain. The contagion broke out in Guayaquil (the media talked of corpses abandoned in the streets, due to the overflow of funerary services and the fear of contagion in the population). On March 16 a very strict emergency was declared. From May this was replaced by a traffic light system that considers the level of contagion in each region. The responsibility for applying it lies in the municipalities. This was a decision of the Emergency Operations Council (COE). A negative aspect is that the municipalities have very different capacities and pressures. For example, in the Amazon they do not have a health system that allows managing this crisis.

“The government has always been behind the news”, said Prof. Abad Cisneros , and has also been harassed by a disinformation strategy that forces them to deny fakenews constantly. Official data is questioned. There is a multiplicity of uncoordinated and often contradicting spokespersons that generate uncertainty. Support for the government is falling, according to surveys it is between 15% and 24%.

Ecuador was affected by the fall in oil prices and was already dragging an economic crisis prior to the pandemic, which has now exploded.
Prof. Pachano pointed out that the agreement signed with the IMF practically became the government's economic plan. The economy is dollarized, which generates a need for flows from outside, and is oriented to import. “A way out of dollarization would be suicidal for any government because it would produce hyperinflation. Rafael Correa considered it in his first government in 2006 and it was impossible”.

Prof. Abad Cisneros explains that the allocations to the universities were conditioned by the oil income and the income tax that have now been reduced, the first due to the fall in oil income and the second due to the change in that tax, which has implied a sharp cut. At the University of Cuenca the cut will mean the dismissal of some 400 teachers from a 1,200 plant, in a university that has 16,000 students. There the teachers will begin to dictate between 22 and 24 hours of classes.

The health system is fragmented, with a public and a private system, and neither of them has a massive arrival in the territory. Currently, the intensive units are all occupied. Mortality was very high in Guayaquil and has tended to drop in the mountains, which has been explained by less informality, better housing, and even weather and habit conditions. The health system is precarious. Corruption cases have been uncovered.

A USD 60 monthly (temporary) bonus has been implemented for people who request it. There are other measures related to the payment of public services, and other aid. Since 1999, a bonus that is now called "human development" of just over 100 USD was created, which has allowed knowledge and identification of people in vulnerable situations and hastens the arrival of the state. But unlike most countries (with the exception of Uruguay) austerity measures were applied. Prof. Pachano, maintains that the government tried to reduce public spending that had inflated during the Correa governments with a 4% reduction in public employment.

The political parties in a typical customer strategy, and with the election in the horizon, distribute food.

In April, the government tried to pass laws by way of emergency (if there is no treatment or if consensus is not reached, they are automatically approved) but finally reached an agreement with the legislative assembly. The Court has also been operating. The problem observed by our analysts is not so much the lack of functioning of institutions but rather the lack of effectiveness of policies, the lack of leadership, the absence of program-based political parties, and the weakness of control procedures. In a pre-electoral scenario, moreover, nobody wants to take charge from the national level of implementing policies that may be unpopular.

Ecuador has not had a strong repressive tradition as in other countries in the region, however support for "hard" options begins to grow.
Prof. Pachano is afraid of the "emergence of a Bolsonaro". The military had stayed out while this time they supported the government, which would otherwise have fallen.

For Prof. Abad Cisneros, right now a key is in the electoral process and giving guarantees for it.

Link to the full event in Spanish: https://www.youtube.com/watch?v=VhvBbFFB_M0

Ecuadorian’s politics in the pandemic