How do authoritarian regimes survive in democratic systems, however imperfect or partial? Rebecca Tapscott, Research Fellow at the Albert Hirschman Centre on Democracy and Visiting Lecturer for the Interdisciplinary Programmes, explores the puzzle in her book Arbitrary States: Social Control and Modern Authoritarianism in Museveni’s Uganda. She finds that such regimes cultivate pervasive political unpredictability to maintain control in the face of democratic institutions and weak state capacity. In this interview, she tells us more about that mode of governance, which she calls “institutionalised arbitrariness”.

Congratulations on your book! What was the puzzle that triggered it?

This book emerged from my PhD work on local security and governance in Uganda. It’s really motivated by a longstanding puzzle that has become more pressing with the rise of authoritarianism in the 21st century: how do authoritarian rulers survive in contexts of democratic institutions? This is puzzling because democratic institutions should theoretically allow civil society to make claims on the ruler and throw out elected officials who don’t pursue the public interest. This is an important puzzle – the vast majority of today’s authoritarian regimes hold regular elections, have a formal separation of powers, and a nominally independent press.

I take this puzzle and I look at a case where the state also has limited capacity. And by limited capacity, I just mean the intuitive definition that the state can’t monopolise violence in its territory or provide basic services to its citizens. This case is interesting because while the state may rely on repression, its limited capacity means that it cannot do so systematically and reliably. So the puzzle then is really pronounced: how do authoritarian rulers maintain the upper hand in the face of democratic institutions that should allow citizens to hold them accountable – all the more when they cannot rely on a strong state that would allow them to efficiently repress dissent?

How did you go about answering that question, and what did you find?

I focused my research on how ordinary people experience the state under authoritarianism, and especially on how they experience security and justice as two key services associated with state authority. To do so, I studied the interactions between state authorities and informal violent actors like community policing initiatives, vigilantes, and militias. My case study was Uganda, which is a well-recognised case of an electoral authoritarian regime in a low-capacity state. I focused on these non-state actors as a lens to understand who can use violence and how, and the implications for state authority. For example, when non-state actors use violence, they may be consolidating their own authority, and in this way challenging or competing with the state – by extracting resources from people in the territory they operate in, imposing their own rules, and even providing basic services like security and justice.

What I found was really interesting and, in many ways, surprising. First, I found that these local violent actors did try to consolidate their authority exactly as the scholarship would expect. They imposed bylaws, they extracted resources in the form of fees and taxes, and they provided varying degrees of security and justice. I also found that state actors encouraged the formation of these groups, and proactively tasked them with using violence to police their communities. This was an active outsourcing of violence to non-state actors. However, these groups did not consolidate; instead, they remained very fluid and poorly defined, in part because their membership often got into trouble with state authorities for using excessive violence or intervening in matters that were post hoc determined out of their remit. As a result, even though they were using violence outside the authority of the state, and even though they were trying to consolidate authority autonomously from the state, they were never able to succeed to a level that would threaten state control in any meaningful way. The implications are that in such contexts, state authorities are able to outsource much of the day-to-day responsibilities associated with providing security and justice, while still limiting the risk that they lose control.

So, linking this back to the paradox of democratic institutions under authoritarianism, my research shows that the presence of multiple different kinds of authorities, each with poorly defined mandates, creates endemic unpredictability, such that no single actor can reliably claim authority over any area. This prevents the emergence of political accountability (sometimes called the “state-society compact”). The take-away is that the state can maintain its authoritarian control even while democratic institutions continue to exist and even to function. These democratic spaces are just so fragmented and fragile that citizens using them cannot gain traction to hold autocrats accountable.

You call this framework “institutionalised arbitrariness”. Can you tell us why you chose that name, and what the framework offers?

My contribution then is two-fold. First, my findings show that unpredictability can be central to how governance works – this is less an original contribution than a corrective to a school of thought that is really focused on the emergence of predictable interactions between citizens and their rulers. Second, I show how unpredictability can be produced and sustained. This helps untangle how seemingly contradictory outcomes can co-exist in a sustainable way.

I propose “institutionalised arbitrariness” as a framework that can help think about the production of arbitrary rule both in Uganda and beyond. I developed the framework inductively to identify four key areas: the lawful and exceptional use of violence, claims and denials of jurisdictional authority, the perceived presence or absence of surveillance, and the extent of state fragmentation.

Where does institutionalised arbitrariness apply, apart from Uganda?

There are many contexts in which unpredictability is central to governing authority, ranging from a type of “ordered disorder” in Karachi to a “twilight zone” in United States’ prisons. However, my interest in the external validity of institutionalised arbitrariness is really focused on these low-capacity authoritarian regimes characterised by democratic institutions. So, to further explore this, I apply the framework to regimes in Ethiopia, Rwanda, and Zimbabwe. I chose these cases because, along with Uganda, they share histories as “liberation movements” that took over historically strong states. They thus face some of the same challenges and adopt similar strategies to deal with them, helping thicken my conceptualisation of arbitrary governance. At the same time, their different institutional approaches to managing ethnic and regional interests across territories and populations of vastly different sizes help me further probe the validity of the framework.

I find that all three cases could be described as “arbitrary”: they are all characterised by fluidity between law and lawlessness, the state’s ability to constantly redefine its jurisdiction, and threatening violence to enforce changing edicts. Yet the comparison reveals important variation, linked to each state’s capacity for organised violence, surveillance, and the overall fragmentation of state institutions. For instance, in Zimbabwe, the state is comparatively highly fragmented; the regime has really sought to undermine state institutions to the extent that they rarely function meaningfully. In Ethiopia, the Ethiopian People’s Revolutionary Democratic Front had comparatively strong state apparatus and surveillance capabilities, and at the same time, the federal state integrated ethnic fault lines into the public sphere. Ethnic tensions thus remained relatively easy to mobilise, potentially threatening future state cohesion. So, even while I have ascribed some level of institutionalised arbitrariness to these regimes, how it manifests and the implications for long-term stability need to be contextualised historically and politically.

You spent nearly twelve months in Uganda between 2014 and 2018. Can you tell us more about that research experience?

Scholars often emphasise the aggregate amount of time spent at a research site, but for the study I did, I think that returning over the course of four years was in many ways central to the findings. I was able to build relationships over years that conferred trust that would have been very difficult to gain in a shorter period of time. I was also able to see how some of the conflicts that I studied unfolded over time. Some of the initial cases that I studied were never resolved, but seeing them ebb and flow over years gave a rich perspective on the life of a conflict, and the diverse actors and interests that come into play. Given the topic of my research, it was also helpful to spend time in Uganda before, during, and after national-level elections, which offered important insight into the militarisation and securitisation of the state’s patrimonial machine; how this comes to life around moments of formal electoral contestation; and the knock-on effects for the years between elections.

Both my times in the field and back in Boston also gave me ample time to think about my positionality both as a scholar and researcher, and a friend and colleague. There’s a very rich tradition, especially in feminist research ethics and methods, of thinking about how to treat the research process with compassion and care. In my own work, I’ve engaged with recent work by Anastasia Shesterinina on fear and empathy in fieldwork, as well as Romain Malejacq and Dipali Mukhopadhyay on how conducting fieldwork in these contexts requires building relationships that by their very nature give deeper insight into some perspectives than others. For me, this manifested in the concurrent empathy and doubt – or sometimes mistrust – that I felt for my interlocutors.

Looking at my research from a bird’s eye view, I see a system structured to make men –and indeed my research was mostly but not exclusively about men – struggle against one another. The vast majority of actors are doing the best they can with the resources they have to hand: local vigilantes are struggling to provide security to their communities and to support their families as respectable young men; local authorities are trying to decrease crime with extremely limited resources; the police are given the unenviable task of being formally accountable to end crime but informally have a host of other duties related to regime maintenance that mean that they are frequently rotated from their posts, limiting their ability to connect to or invest in the communities they police. At the same time, Uganda is rife with foreign researchers, so it seemed likely that anyone who wanted to speak with me had an agenda – some benign, others perhaps not. Just as this tension between empathy and doubt can be exhausting, it can also be animating. I found it drew me into the nooks and crannies of conversations to try to really understand my interlocutors in the context of these broader power structures.

What are you going to do next?

I’m so glad you asked that! One part of this research that I was not able to explore in the book, but that I hope to pursue going forward, is the role that masculinity, and in particular militarised masculinity, plays in shaping the state-society relationship. I have an exploratory article in International Affairs but the basic idea that I hope to develop is that gender is an extremely powerful mechanism to translate elite-level authority into the everyday lived realities of people that colours not just the public sphere but also private and interpersonal interactions. I’m also working on a project that builds more directly on the book, looking at international authoritarianism – so stay tuned! 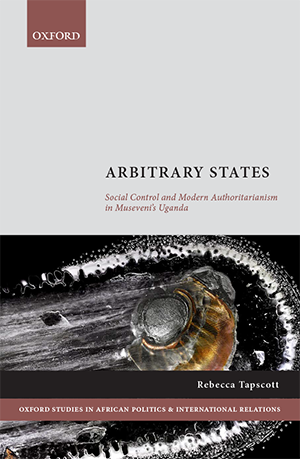 Arbitrary States is also publicly available on this page of the Graduate Institute’s repository.