Updates from the field by Bijayashree Satpathy

The SNF-supported research project Extracting Voice: the subnational law and politics of relationships between mining companies and affected communities in India uses District Mineral Foundations as a window into the political transformations of, and driven by, extractive economies in India. The project explores the dynamics of sub-national politics in the Indian mining sector, and their effects on socially and ecologically sustainable mining governance.

The mining sector generates significant social and ecological harm due to forced displacement, expropriation, ecological degradation, and destruction of livelihoods. Mining areas have also experienced violent conflict and legal disputes along with protracted struggles for land and forest rights. This follows the general dynamics of extractive economies around the world.

In response, Indian policymakers passed a legislation in 2015 establishing District Mineral Foundations (DMF). DMFs are an instrument (usually Trusts), established in each mining-affected district of the country, to collect a percentage of mining revenue for the direct benefit of affected communities, and which those communities are supposed to govern in conjunction with other local stakeholders. The project studies the implementation of DMFs to reveal how they are refracted through subnational rentier politics so endemic to mining. It asks: given that mining operations occur in complex and varied local contexts, how can companies, communities, and local authorities meaningfully collaborate in decentralized mining governance? Do DMFs mediate the company-community relationship, or do they reproduce and intensify patterns of regulatory and state capture?

Mining companies in these regions, as with extractive frontiers across the world, are established with the promise of new employment opportunities for local communities. Communities’ aspirations for improved standards of living, and the narratives of both mining companies and the State ensures the maintenance of this potential for employment. However, in reality, companies largely employ high skilled migrant labourers in secure and formal positions due to increasing mechanisation in operations, whilst also create conditions which result in mid skilled migrant labour from either outside the state or district. On the other hand, local populations are employed in extremely low paid and precarious conditions as sub-contractual labour, and in very low numbers. This also coincides with the loss of traditional livelihood generation activities that are sometimes partially offset by the establishment of projects initiated through Corporate Social Responsibility and Non-Government Organisation funding to support small-scale activities for temporary and often short-term durations. However, overall steady jobs are absent, traditional livelihoods are eliminated or reduced, and new projects are temporary.

Against this backdrop of rentier politics, communities are largely unaware of DMFs and its functions. The community representation in the governance of DMFs is often limited in principle to the Sarpanch of the Gram Panchayat (or head of the village council) – and the quality of representation is variable. In practice, the District Magistrate or Collector – the chief district-level bureaucrat – takes the decisions regarding DMF projects and budgets.

As a consequence, DMF funds are often spent away from the communities they are supposed to benefit. Talking to ‘mines, minerals & PEOPLE’ (mm&P -- an alliance of individuals, institutions and communities who are concerned and affected by mining) members in Sundergarh and conducting fieldwork in Keonjhar, Bijayashree Satpathy found that most of the funds are used in the construction of infrastructure in district headquarters, or for the benefit of the hometown or village of the local Member of Parliament (MP) or Member of Legislative Assembly (MLA). When they are spent on affected communities, communities are wary of their low rate of return: in Keonjhar, tribal communities are unhappy with DMF-funded agriculture programs, since the income they generate is far lower than that of the extractive activities which fund them. This combination of suspicion and low awareness creates space for local leaders to uphold positions over the villagers and maintain their connections with powerful groups by motivating villagers (including youths) to remain contingent on the benefits from mining activities. The local level politics may reduce the potential of DMF for mining-affected communities to any other government welfare schemes. Further, the implementation of similar projects by a parallel institution – OMBADC, in mining-affected areas may impact the purpose of DMF.

Bijayashree Satpathy is presently continuing her fieldwork in Tamnar, which has a high concentration of tribal populations and is also one of the most affected coal mining blocks in Raigarh district in the state of Chhattisgarh. Coal and limestone are the major minerals extracted from this district by major companies like South Eastern Coalfields Limited (SECL), Jindal Steel and Power Company and Hindalco Industries Limited. Since a major share of DMF contributions comes from coal mining in Chhattisgarh, it is interesting to explore the company-community relationship in this state as well. 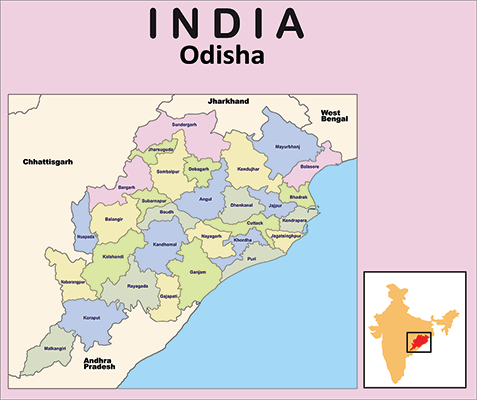