The Revolt of the Elites

When “populist elites from above” revolt against democracy

An international renowned theorist of globalisation, Arjun Appadurai, Goddard Professor of Media, Culture and Communication at New York University, was among the first visiting professors hosted by the Albert Hirschman Centre on Democracy after its inauguration in 2017. His influential writings on “grassroots democracy” have shaped the Centre’s research programme on democratic practices in a comparative perspective. A recording of Arjun Appadurai’s public lecture at the Graduate Institute on “the Global Swing to the Right” analyzes the recent rise of authoritarian populist leaders and movements worldwide. Given under the auspices of the Centre, it is available under our multimedia resources. His new piece on “The Revolt of the Elites” is an incisive examination of the political programme of the new elites in various parts of the world, who have paradoxically revolted against democracy in the name of the people. It analyses the social composition of the elites that have captured electoral politics using affect instead of reason to deliver their message of ethnophobia. And it provides an answer as to why this politics of hate is attractive for the masses.

Ortega y Gasset is a largely forgotten 20th century thinker, an unconventional Spanish philosopher whose most important social science work, The Revolt of the Masses, reflected his fears about a world in which liberal individuals were disappearing and the “mass man” was emerging. Ortega’s idea of the mass man was not a picture of the poor, the destitute or the proletarian multitude but of a mass of average men, who were rendered similar by their tastes, dispositions and values, rather than by their dispossession. In this way, Ortega was closer to the later American critics of the men “in the gray flannel suit” than to the Frankfurt School critics of mass society. Still, Ortega was an early voice in seeing the masses, of whatever kind, as revolting against the liberal ideals of the nineteenth century.

I return to Ortega now because I think the 20th century has exhausted the major forms of mass revolt and that we have entered a new epoch which is characterized by the “revolt of the elites”. These revolting elites are those who support, surround, promote and flatter the new autocracies of Modi, Trump, Erdogan, Bolsonaro, Johnson, Orban and many others who have created what could be called populism from above, where the people are electoral tools for a mass exit from democracy.

Why call this behaviour of the new autocratic elites a “revolt” rather than simply predatory capitalism, cronyism, neo-liberalism in its latest guise, disaster capitalism, all of which are available terms? Who are these new elites and what are they revolting against?

First, they are revolting against all the other elites whom they despise, hate and fear: liberal elites, media elites, secular elites, cosmopolitan elites, “Harvard” elites, WASP elites, older economic elites, intellectuals, artists and academics (these categories are a pool, from which different national populists choose the appropriate national and cultural terms). So, this is an elite which disguises its own elitism in a discourse of anti-elitism.

Second, this revolt is against all those who are believed to have betrayed the real elites and captured power illegitimately: blacks in the USA, Muslims and secularists in India, leftists and gays in Brazil, dissenters, NGO’s and journalists in Russia, religious, cultural and economic minorities in Turkey, immigrants, workers and unionists in the United Kingdom. This is a revolt by those who think they are true elites against those they consider usurpers or false elites.

Third, the revolt of these new elites is against the chains that have bound them in the epoch of liberal democracy. They hate liberty, equality and fraternity, except for themselves. They hate checks and balances, which they view as illegitimate restrictions on their freedom to act without restraint. They hate regulations of any type, especially of corporate privileges, which they see as a conspiracy against capitalism which they view as their private jurisdiction. And above all, they hate deliberation and procedural rationality, since they involve listening, patience and adherence to collective rationalities. They also do not believe in the separation of powers, except when their friends control the legislature and the judiciary.

What this means, most simply, is that the revolt of the new elites is against democracy, but the twist is that this revolt is undertaken in the name of the people. In other words, the modern idea of the people has been completely split from the idea of demos and democracy. This is a revolt, (in the sense that uprisings to seize power are always revolts), but not a revolution, intended to change something in the fundamental order of polity or economy. This revolt is the effort by one elite to replace another.

All this might seem overly general and historically familiar if we do not ask a few sociological questions. What is the nature of this new elite? Who defines its conditions of entry? Who speaks for it? What are its social roots? These questions quickly bring us to specific societies and states. In the case of the United States, the elite that Trump speaks for and to come from backgrounds like his: they are not over-educated, they are mobile entrepreneurs or politicians, they are the ruling scum of the Republican senate, the Republican side of  the House, and Tea Party jetsam and flotsam at every level of politics. In addition, they include the more megalomaniac or neo-fascist CEO’s (including Silicon Valley icons like Peter Thiel), the vast majority of the television and radio media, and the extensive network of racist and greedy evangelical pastors, churches and donors. Add to this the careerist hacks in the major right-wing thinktanks. At the very core of this network of elites without any obvious cultural roots, status or history are secret networks such as those in the Federalist Society, with ties to such transnational groups as Opus Dei. These are networks of opportunism, greed and profiteering which have no other traditional ties or values.

A similar picture could be painted of the elites of the current regime in India, which is openly contemptuous of every democratic institution except elections. It is composed of half-educated economists, career thugs, kleptocratic business tycoons that work through monopoly, lobbying and straightforward corruption, and the newly shameless class of criminal politicians and legislators. The revolt of this elite is against every person or group associated with Nehruvian socialism, secularism and pluralism. It is an elite that believes that the Hindu Right (their own club) are the sleeper-saviours of Indian history, waking up after the long slumber of Mughal, British and Congress rule, an alliance forged in the crucible of anti-Muslim ideologies, policies and pogroms. There is no real class unity for this revolting elite, except for their hold on the means of impunity, political, social and economic. Like Trump’s elite partners, this is an elite of opportunism, lubricated by contempt for participatory institutions of every type.

Although I do not know enough about the social origins and pet peeves of Erdogan’s crew, or Putin’s, or Bolsonaro’s, or Duterte’s, I am prepared to speculate that each of these revolting elites has a similar profile: resentment of traditional cultural and social elites, contempt for liberal proceduralism, hatred of intellectuals, academics, artists, activists, socialists, feminists, admiration for capitalism so long as it regulated only in their favor, and a hatred of democracy matched by their cultish pursuit of the voter (rather than the people). Viktor Orban has just declared his eternal and absolute power in Hungary, Trump has required his name to be printed on COVID relief checks and said that he can use emergency powers to do whatever he likes in the present crisis. Modi has more or less declared himself above the Constitution of India, has made common and public cause with Bolsonaro, Trump and Netanyahu, and has used the COVID crisis to extend to all of India the policies of curfew, police beatings, false imprisonments and generalized repression tested in Kashmir. In all these moves, these leaders rely on a network of sympathizers and collaborators who are believe that they will thrive if they comply with the Supreme Leader.

Thus, if the elites who characterize many of the world’s new populist autocracies are “populists from above” elites revolting against previous elites, revolted by liberal democracy, how do we account for their followers, their voters, and their base, the “people” in whose name and with whose burning consent they are undoing many democratic structures, values and traditions?

There are some familiar answers to this most troubling question. One is these is that these autocrats understand and use the instruments of affect (sentiments of love, loss, sacrifice, hate, anger) whereas their opponents are adrift in a sea of quasi-academic arguments about concepts, norms and logic, which has lost all popular purchase. The second is that there is something about the global rise of technologies of aspiration (advertising, consumer goods, celebrity cults, corporate windfalls) that has made the poor and subaltern classes impatient with the slowness of liberal deliberative processes. They want prosperity and dignity now, and these leaders promise it to them. Another argument is that the lower classes are so fed up with the exclusion, impoverishment and humiliation that they identify with their predatory leaders (who simply grab what they want) and that they are more than ever susceptible to the distractions of ethnophobia (against Muslims, refugees, Chinese, Gypsies, Jews, migrants, and so on). All these arguments make some sense in some national contexts.

But I suggest that the biggest insight that Ortega y Gasset offers is to help us to see that we are in the beginnings of an epoch in which the revolt of the masses has been captured, co-opted and displaced by the revolt of the elites. The most troubling thing about this capture, which the continuing use of elections by autocrats reveals, is that the masses (whoever they may be) have come to believe that the revolt of the new elites is indeed their revolt, and that all they need to do is to cheer (and if possible to emulate) their demonic leaders, who might offer them a quicker fix than a genuinely popular or insurrectionary effort to change the order of things. In a manner of speaking, the new electoral masses have begun to feel that the benefits of their predation of their leaders will soon trickle down to them. The main such trickledown deliverable is that the poor and subaltern classes can now kill, maim and humiliate their weaker scapegoats with impunity. The trickledown of the more quotidian benefits, such as jobs, health care, higher incomes and safer cities, still calls for endless patience from those at the bottom of the pyramid. If hate can trickle down to them, so perhaps can prosperity. 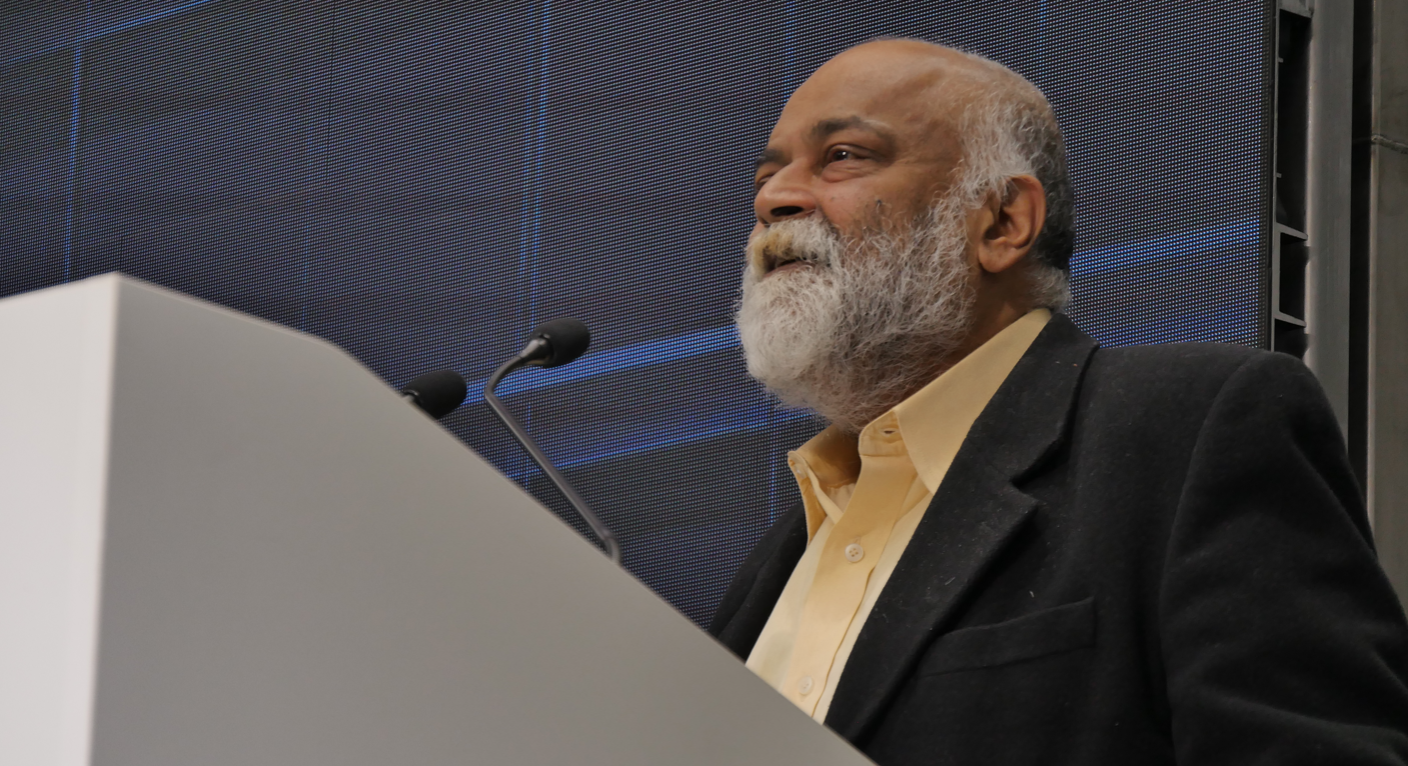 Arjun Appadurai during his lecture in 2017

Arjun Appadurai is the Goddard Professor of Media, Culture and Communication at New York University and Professor of Anthropology and Globalization at The Hertie School (Berlin). He serves as Honorary Professor in the Department of Media and Communication, Erasmus University, Rotterdam, Tata Chair Professor at The Tata Institute for Social Sciences, Mumbai and as a Senior Research Partner at the Max-Planck Institute for Religious and Ethnic Diversity, Gottingen. Appadurai is the founder and now the President of PUKAR (Partners for Urban Knowledge Action and Research), a non-profit organization based in and oriented to the city of Mumbai. Among his most important publications are: The Future as a Cultural Fact: Essays on the Global Condition (2013), India’s World: The Politics of Creativity in a Globalized Society (2012), Modernity At Large: Cultural Dimensions of Globalization (1996).

Watch his video interview with Shalini Randeria at the Albert Hirschman Centre on Democracy in which he discusses the rise of populism and the future of the nation state, and an earlier conversation on the Flows of Globalization.