Afghanistan, displacement and migration: What do recent events mean for future dynamics in the region?

Afghanistan, displacement and migration: What do recent events mean for future dynamics in the region?

In the shadow of the 20th anniversary of the 9/11 terrorist attacks by al-Qaeda, the country that was widely considered the haven of those behind the attacks - Afghanistan - is again facing a dual humanitarian-displacement crisis due to the recent allied troop 'end-date' withdrawal. “Anticipatory displacement” saw thousands depart ahead of the allied troop withdrawal, but only the minority with the resources and connections could do so.

Prior to the withdrawal, Afghanistan was already dealing with a humanitarian crisis, with half a million people internally displaced due to conflict and disaster, more than 800,000 newly returned Afghans from Iran and Pakistan, and 14 million (or 35% of the country) facing hunger and in urgent need of food.

The collapse of the Afghan government has brought into sharp focus Afghanistan's highly fragile political, security and economic foundations. The IMF and the World Bank have frozen their programs in Afghanistan and the US Treasury has blocked its dollar reserve, further accelerating the imminent economic collapse. In addition, a large part of the Afghan population depends on subsistence agriculture, which is highly affected by climate change in the form of drought and seasonal floods.

The economic conditions, security volatility as well as human rights abuses and persecution of the Taliban regime might create the perfect storm for major displacement outflows that could remain for many years to come. In this joint IOM Migration Research Division and IHEID Global Migration Centre webinar, experts on Afghan migration will critically examine the events under way in Afghanistan and explore the implications for migration and displacement in the region, and beyond. 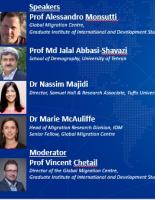