Bolivian politics in the pandemic 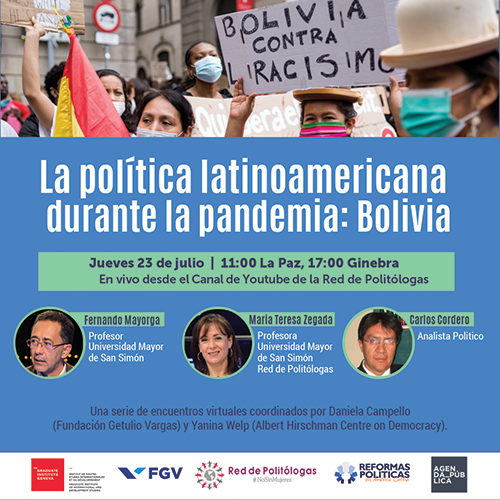 On October 20, 2019, there were general elections in Bolivia. The biggest expectation was to see if the ruling party was able to win in the first round or the country had to face a second round. At midnight the vote count was suspended and when the system was restored it indicated a clear victory for the party in government. There are many arguments to explain it from the one side and from the other, but in any case, the demonstrations exploded. The protests led to violent clashes. After days of extreme tension, on November 10, President Evo Morales (MAS) resigned and left the country. It was positively understood by the opposition but as a result of a coup for the supporters of MAS. Democratic institutionality is seriously injured since then and elections are considered essential to begin to normalize the situation. The Supreme Electoral Tribunal announced them for May 3, 2020, but later on suspended it due to the pandemic, first  September 6, and amid the growth of infections and deaths, for October 18. Our analysts are from different ideological positions but they also agreed on many points, listed below.

1. Political and electoral use of the pandemic

The analysts in our conversation disagree when evaluating the previous political situation: whether or not there was fraud in the last elections, the role of the Organization of American States helping to resolve the situation or contributing to the escalation of the conflict, and whether Morales' resignation was the result of a coup or of a crisis resolved within the institutions. However, they do agree that the government of Jeanine Añez has exceeded the exercise of its functions. If the provisional president was in charge of organizing quick, free, and fair elections, her postulation as a candidate has contributed to add even more darkness and tensions to a situation already dense and complex. Carlos Cordero defines Añez’s candidacy has ‘toxic’.

The unprecedented situation caused by the conjunction of the pandemic with a transitory government that centralized decision-making without having legitimacy to lead the emergency and has rather tended to use it for its electoral purposes has also contributed to increasing corruption. There has been a discretionary use of decrees and financial resources that, although it has also been the predominant mechanism in other countries, in Bolivia has functioned as a tool for corruption.

3. A sanitarian and economical emergency

The Bolivian health system was not prepared to face the pandemic, the hospitals are collapsed. The health system was already under pressure from its low responsiveness to other chronic and seasonal diseases before the pandemic. Economic aid is insufficient to accompany confinement measures in a country whose informal economy exceeds half of the working population.

As we have seen in other countries along with the series of seminars, institutional violence is present in Bolivia, showing that there is a certain proclivity in institutions such as the armed forces and / or the police to activate violence against the most vulnerable, be they the poor, indigenous people or LGTBI groups.  Fernando Mayorga points out that in recent months paramilitary groups have emerged in Cochabamba, groups that did not exist before and express the negative side of polarization in a dangerous drift leading to the denial of ‘the other’.

5. Elections as the only door to find a solution but are not enough neither an automatic response

The three analysts coincide in observing that the MAS continues to be a weighty actor in the electoral landscape but it will be difficult for the former party in government to win the elections in the first round. It draws attention to the need for a political agreement that allows elections to be the mechanism to get out of the crisis. Bolivian citizens still trust democracy and institutions. Political actors should operate responsibly to generate a framework of an agreement for the electoral process and to prevent its results from being discredited. If the losers do not accept the results, the drift would be irreversible. María Teresa Zegada points out that an exit of a different nature than the electoral one would be massively rejected by Bolivian society.

Link to the full event in Spanish: https://www.youtube.com/watch?v=76znCPyIExA