Brazilian politics in the pandemic

The case of Brazil was on focus on July 16, 2020, with the participation of María Herminia Tavares de Almeida (CEBRAP), Adriana Abdenur (Plataforma CIPO) and Magna Ignacio (UFMG- Red de Politólogas). 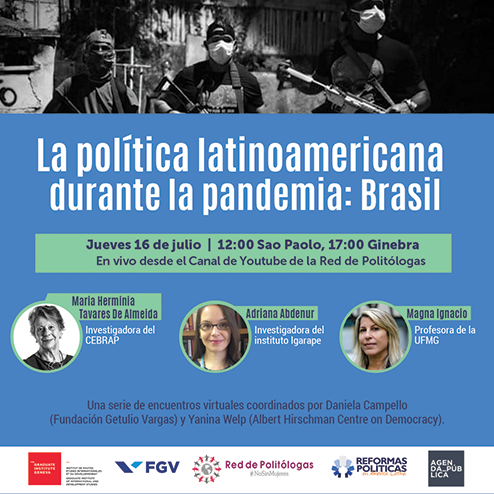 The infected people in Brazil are already counted in millions and the number of deaths exceeds one hundred thousand (at the time of recording the conversation). With a far-right denialist leader, the prospects for democracy and human rights are bad. But not all are shadows: the analysts in our conversation point out that in Brazil there was an installed capacity of the health system that allows to better cover (confronted with other countries in the region and to some extent), the sanitarian needs of the population. They also point out that if we stick to the measures taken, the course set has not been very different from that observed in other parts: confinement, cancellation of public events, school closings, different lockdowns. However, the measures are less effective because there is a denier president who does not show any empathy with the suffering of the population, there is a lack of coordination between levels of government, and the executive is constantly engaged in a strategy of confrontation with any and all political adversaries. There is more: corruption and organized crime are increasing, involving members of the president's family. If the president does not have a party and is increasingly isolated, why he does not fall, in a country that has previous experience practicing impeachment? Two possible and complementary responses come from his ultra-liberal economic agenda, which generates support from an elite that may not like Bolsonaro but does not have a better person on hand to promote the reforms they want; and the strong presence of the military that –in Herminia Tavares's words– “complicates everything, even the possibility of impeachment”.

1. Lockdowns like almost everywhere, but untimely and without coordination

The economic and health measures taken are not very different from those taken in other countries. What stands out is the lack of coordination and coherence. For example, a state requires the mandatory use of masks and the president vetoes the measure. The Health Minister has been removed from office for contradicting the president's and for becoming more popular than him, and he has yet to be replaced. There are no clear policies. The presence of the president at public events without wearing a mask neither respecting social distancing and suggesting medicines not approved by the WHO or by the scientific community (such as chloroxyhydrine) has negative effects on the compliance of the measures by the population. Ariadna Abdenur highlights the president's lack of empathy, who in his public appearances makes no reference to the families that have lost relatives or are severely suffering the economic consequences of the pandemic.

There is an installed capacity of the health system that is above the Latin American average. Even so, there are huge differences between territories and there are areas that are very vulnerable to growth in infections, especially in the northeast. This installed capacity has facilitated a response not only in health but also in the availability of a register of people in situations of economic vulnerability that can be reached faster with the economic aids.

3. The legislative and judicial powers try to function as a counterweight to the president

President Jair Bolsonaro has tried to concentrate power and has activated what Magna Ignacio calls “administrative unilateralism” but faces resistance from both the Court of Justice and the legislative branch. In the specific area of ​​aid offered to economically vulnerable segments of the population, the legislature has managed to improve the initial government proposal.

There is a debate about the current increase in corruption in the context of the pandemic. Analysts point to the links between Bolsonaro and his family with organized crime and even with the murder of activists such as Marielle Franco.

Bolsonaro does not fall because there is still an ultra-liberal elite that supports his measures and / or cannot find another actor to replace him. Its program to reduce the State is pending and the pandemic has led in the opposite direction, to approve more state intervention. These economic aids have increased Bolsonaro's support among the most vulnerable popular sectors that until now had been voters of the Workers Party and / or the left. While impeachment is not clearly visible in this highly volatile scenario, its possibility is constantly being talked about. The support of the military is uncertain because they have a strong presence in the government but there is also insatisfaction with his management. The presence of the military even complicates the prospect of impeachment. Bolsonaro could try to negotiate with other parties in congress, which could strengthen him.

In the face of the municipal elections, which function as a government test, it will be necessary to see what happens. They will take place in a context of uncertainty, with a president without a party and with volatile and changing support.

Link to the full event in Spanish: https://www.youtube.com/watch?v=wEJ9vqmZTmk