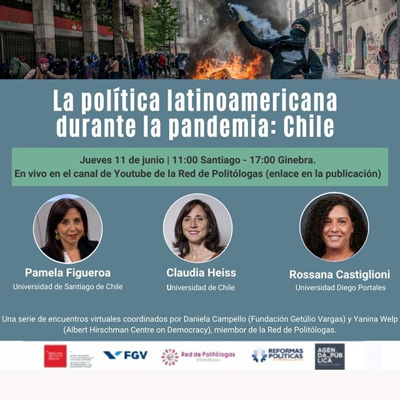 In October 2019 social protests spread in Santiago, Valparaiso, and other cities of Chile. After several years of cyclical sectorial protests, this led to an unprecedented movement claiming for political and economical reform. As a first answer, President Sebastian Piñera (a Chilean billionaire businessman, from the right National Renewal party,) mobilized the military creating the rejection of many sectors in the country including the armed forces. But it did not work and the protest did not stop so negotiations were opened, arriving at an agreement to call a plebiscite to decide on a constitutional replacement. Despite many amendments, the constitution in force is the one approved during the dictatorship of Augusto Pinochet. The plebiscite was scheduled for April. Then, the pandemic started.

On March 18 the president decreed a State of Constitutional Exception due to the crisis caused by the coronavirus. The extension of the exceptionality and the mobilization of the military to supervise the confinement have not prevented the contagious. Chile has one of the worst figures of per capita infected people in the region. Several factors could explain why despite being one of the countries which more tests have made and the hardness of the state of exceptionality the quarantine does not work. The experts in our conversation stress the lack of measures to support people working in informal sectors and the rotative quarantine, which proved to be a wrong policy. Below the main findings emerging from the conversation.

1. The management of the sanitarian crisis has been erratic

The government defined a strategy addressed to apply quarantines in stages (rotary quarantines) that have not worked. Some measures were appropriate, such as preparing the health system by buying fans and expanding the number of beds as well as testing much more than in other countries in the region.

For Prof. Castiglioni, it was a good start but the government made two "unforgivable mistakes": financial aid was oriented towards formal work when approximately a third of the labor market function in informality. This made it impossible for these people to respect the quarantine. The second mistake was the "safe return plan", in mid-April, which was rushed.

The role of the medical college has been key giving public advice which was first rejected by the government. Later on, the government accepted to talk with the experts but the Minister of health has been strongly criticized by his lack of empathy and arrogance.

2. The government's discourse is confrontational

The scholars in the conversation agree that the government has managed the pandemic with a non-dialogue attitude, focused on confrontation with mayors and expert groups, in particular with the medical college.

For Prof. Heiss, "there is a very impressive policy of not recognizing mistakes. The health minister ridiculed the quarantine and then said he had been 'seduced' by the idea of rotating quarantines as if he had been dragged away by the forces of nature". Originally the model was herd immunity, as in the UK. The minister says that he was seduced,  he does not admit his mistake, he invites a dialogue but accuses any critic of little less than a traitor. All the pressure is on the individuals who are accused by the government for their lack of responsibility without recognizing the limitations of the neoliberal approach they have promoted. The approach is repressive and not an accompaniment in care and financial support.

3. Economic policies are insufficient and / or wrong

The opposition parties and some social sectors requested an emergency income because the Chilean economy collapsed in a few weeks. People began to live in a very precarious situation but no aid has been planned. The government policy has been addressed to food distribution, which has generated much criticism. Aid does not arrive and the citizens turn to the mayors who are then taking the initiative and criticizing the government. The government's concern was to combine caring for the economy with caring for the health, but the discourse has not been very empathetic, and economic measures have been limited to the formal sectors.

For Prof. Castiglioni “avoiding the loss of income at the individual level should be the priority, and that has been failed”. Prof. Heiss points out that the copper stabilization fund is available and could be used and many economists have indicated that Chile has the capacity to do so, but it has not been

4. There is a crisis of the political class as a whole

For Prof. Figueroa, the government has been reactive. The president faces the crisis with low citizen support but by taking the reins of the matter his low popularity improved. The opposition was then invited to dialogue, but the proposals were not taken into account. The three experts agreed on is stressing that there is a crisis of legitimacy that affects the political system as a whole.

Mayors have gained prominence, even those of the same governing party. Despite this, “the explanation could come more from the activation of a war speech – says Prof. Heiss –  which makes several actors have increased their popularity and at the same time people feel unprotected”.

Prof.  Figueroa maintains that the government received the pandemic in a context of social mobilization and a growing cycle of protests. In this process that has been going on since 2006, the social outbreaks of 2019 and the agreement to call the plebiscite originally scheduled for April were reached. However, this agreement is strongly resisted by very conservative sectors of the government. Some sectors are now seeking not to postpone the constitutional plebiscite but to cancel it, ignoring the broad social mobilization that promoted these processes.

On the role of the military, Prof. Heiss points out that the government tried to avoid responsibility by invoking the military, but it is more personal than an institutional problem. There is no risk of military intervention. It is key that citizens have certainty that the emergency is not going to be used to reverse the political agreements reached. Prof. Figueroa alerts on the crucial moment the country is facing and the relevance of giving political, and economical answers to citizens' claims.

Link to the full event in Spanish: https://www.youtube.com/watch?v=eC7Op3RVmCQ