A letter from California from Prof. Susanna Hecht

On 16 June, Prof. Susanna Hecht, CIES executive committee member, wrote a letter on the current events in the United States of America. You can read it below.

About 120,000 deaths, more than 2 million infections, 40+ million out of work and the meanings of this in the US, California. The rising Brazilian mortality and burgeoning dangers in the the Amazon. These were the headlines I had imagined earlier in the spring term when  the Centre for International  Environment Studies (CIES) asked me to write a short note. I thought that I would be writing a note that was more about the changing fortunes of the coronavirus in California and in the US. I had hoped that I would be writing a narrative of a kind of “new deal” in which governance had somehow magically shifted in the current administration, support for the most affected economically and a strategy for mitigating the effects medically would be in place and that we would be seeing a kind of transformative, or at least more humane structure emerging from the double trauma disease and economy.

This did more or less happen in California where Los Angeles Mayor Garcetti and Governor Newsom closed down early and strongly, got money out to workers, facilitated other state transfers, housed homeless people in empty hotels and motels, and confronted our generalized carceral system by reducing jail populations, started testing like mad (half the US tests are from California), and used the time to prepare for the mortal onslaught. Both the governor and the mayor were calming supportive, science based, empathetic, and very informational. They held press conferences almost every evening at 5:15, so one can be informed of the latest on Corona. In the last week, of course, they have shifted to the uprisings against racial discrimination .

The vast inequalities revealed by the Covid disaster could, one imagines, stimulate a kind of citizenship of solidarity and responsible government. Instead what we have now is a president who takes no responsibility but demands absolute authority. US mortality is going off the rails again, with only indifferent silence from the White house. The kind of fiscal and material assistance the administration could provide is shrugged off to the states and city mayors who must procure them in a kind of global jungle capitalism competition.

Another catastrophe to bungle: the largest urban uprisings in a generation. Over 140 cities have had protests and disruption, with national guard deployed in most. Lots of places have police forces that do not routinely kill even though harassing people of color seems to be a basic practice (people of color get stopped five times as much) and what the riots and testimonies reveal is the pervasive sense in our communities that one might not return from a run, from work, from a store, from school, from birdwatching. The Amy Cooper tape of her calling 911 explaining that her life was under threat from a black man (a science editor and bird lover---hardly criminal descriptors) after he asked her to leash her dog, showed just how easily, deeply and casually  racism imbues, indeed constitutes  our culture and  how nonchalantly it is deployed to endanger.

In Santa Cruz, though, just up the coast, the police took the knee with the protesters.  The images and news here in California are much different and variable, with a lot of peaceful demonstrations and organizing to limit looting and protect people.  Here in LA, many went to the protests and were inspired by them, People from community and religious organizations urged calm. Garcetti in my town, listed a series of actions that would start to deal with the dynamics of racism and community recovery, immediately allocating 150 million away from the police. A larger dialogue is going on -community security does not by definition come out of the barrel of a gun but it’s hard to do cultural change with our current president. 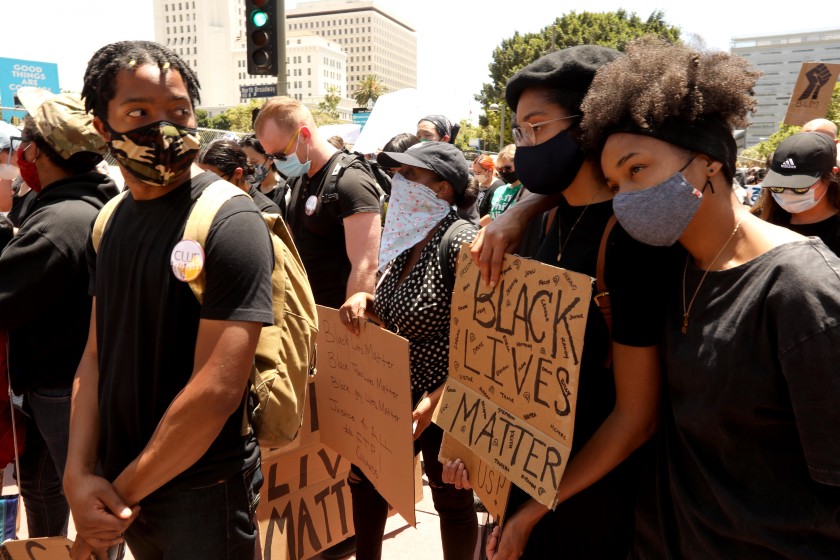 Through all the Trump poor governance, science denial, public humiliations, institutional rampages and tweets, I have been haunted by another horrendous leader: Francisco Solano Lopez, the President of Paraguay in the 1860s. Lopez never saw a situation he couldn’t turn into a conflict. Paraguay at the time was the most developed country in South America, with railroads, vaccinations, British engineers expanding its armament industry, and a vibrant economy. Lopez embarked on the disastrous war of the triple alliance where he took on Brazil, Argentina and Uruguay. Most of the men died with cholera, yellow fever and malaria, as well as the odd military skirmish, but it was a slaughter any way you cut it. A Brazilian observer gazing over the physical and political rubble later remarked:

“It was too bad his country had to die for him”.

I don’t think we are quite there yet: more than 140 cities are uprising, there are protests in all states and neighborhoods everywhere are in demonstrations. The Post and NYT described Donald J. Trump as a fascist for the first time this week.

We’ll see. Trump initially planned his first post-covid Rally in Tulsa (home of one of the worst repressions of black citizens), on the 19th of June, otherwise known as Juneteenth, the end of slavery in the US. After outrage and outcry, the rally was moved to the 20th of June, but the alarm over an indoor arena with people yelling, screaming and unmasked has public health officials everywhere gulping down handfuls of Xanax and hoping for further delays, and trying not to offend. As for taking responsibility? To attend you have to sign a waver promising not to litigate should you become ill from Corona at the rally. From Lafayette square, to Westpoint, to Tulsa, it's all becoming photo-ops. With ex Secretary of State Bolton's book about to come out, and a family "tell all" about how Trump treated and cheated his relatives (he has brothers! he has a sister! Who knew?), more of Trump' s bonfire of the vanities helps fuel the fury in the American streets. And the climate storms haven’t even really started yet!

Miss you all. We’ll be together again soon.
Susanna