MEXICAN politics in the pandemic

The pandemic caused by the spread of covid-19 and the economic consequences of the measures taken to mitigate it are putting Latin American political systems in tension. This series of webinars delve into the analysis of each country in conversation with prestigious local analysts. This initiative has the backing of the Graduate Institute, the Getulio Vargas Foundation, Red de Politólogas, Agenda Pública and the Observatory of Political Reforms in Latin America. 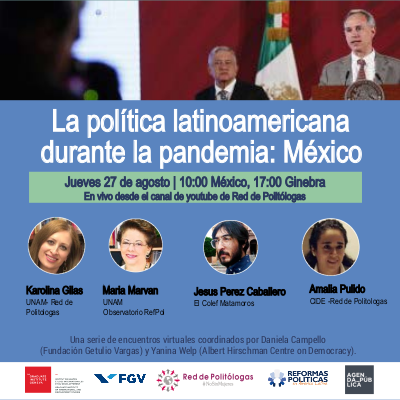 Andrés Manuel López Obrador (AMLO) won the Mexican presidential elections in 2018, achieving an unprecedented majority in both houses (something that had never happened since the transition to democracy in 2000). His party, the Movement for National Regeneration (MORENA, in Spanish), struck an alliance with several political parties. This allowed him to assume the presidency and announce that he would lead what he has called the Fourth Transformation (4T), with the first three being the Mexican War of Independence (1810-1821), the War of the Reform (1857-1861), and the Mexican Revolution (1910-1920). Ending corruption, poverty and crime were his main goals. The pandemic started in Mexico in his second year of mandate. AMLO’s initial reaction was to neglect and minimize the pandemic, an attitude he shares with Jair Bolsonaro and Donald Trump, regardless of their ideological disagreements. Then, once the numbers of contagion and death produced by the virus started to affect the country, his policies and discourse began to change, but in an erratic manner. With almost 130 million inhabitants the country is currently the third in the Americas in the number of infected people. Mortality rates are also growing. In our conversation, experts agreed the government’s performance to date in the areas of health and economics has been sub-par. They also observed potential risks for the country’s democracy in the tendency of the President to verbally attack the media and political opponents.

1. The government retains its popularity despite the bad management

Analysts agreed that the government's management of the pandemic has been poor. The health system was not prepared, and the AMLO government weakened it even more by, for example, eliminating the widely used previous insurance without replacing it with other adequate system. The government also failed to appropriately manage the country’s economy. All countries fare more or less badly in this respect, but Mexico’s economy had been suffering since before the pandemic and will eventually be one of the most affected countries in the region. Finally, a similar negative evaluation was made with regards to communication. Government communication was described as inefficient because of its inconsistency and lack of clarity: in several instances, the President assumed public communication himself and contradicted previously communicated instructions from the Health Ministry. In other cases, what was said and what was eventually done were not coherent, which in turn triggers low compliance with health recommendations. The President's speeches, rather than focusing on giving public health recommendations, often become polarizing and confrontational. This strategy does pay off, however, as it allows him to maintain his popularity, which continues to be high.

The government’s social spending targets certain demographics such as the elderly and the young, but neglects others such as women. The counterpart of such sectoral policies is the weakening of access to social welfare in general: for example, violence against women has grown due to confinement and adequate measures were not taken. The President claims women’s issues are a priority, but the women's movement has gained strength and claimed on numerous occasions that words do not match the actions of the government. For example, while the figures for domestic violence rise, the budget devoted to gender issues and social policies, such as childcare centres, has been reduced. Feminists denounce that the President, directly and indirectly, is threatening the lukewarm advances made for the empowerment of women in the field of social policies.

Mexico is known for its high levels of violence, which includes organized crime and the disappearance of thousands of people over time. Recent governments have always put the fight against organized crime at the forefront, and they have failed. When he took office in December 2018, AMLO announced that his plan to tackle violence would seek to tackle its root causes: corruption, the lack of employment opportunities, and quality issues in the education and health systems. He also announced that his government would reformulate former president Felipe Calderón’s (2006-2012) “war against drug trafficking”, which had disastrous results. However, neither the causes have been addressed to date nor is the policy against organized crime effective. This is particularly worrisome as, in the context of the pandemic, organized crime groups appears to be seeking to “strengthen their social bases” by providing assistance where the state does not. Thus, the situation was worrying and is getting even worse.

4. There is no progress in the fight against corruption

Tackling corruption and austerity measures are central to the vision the government has laid out. However, this vision remains merely rhetorical as there are not specific and clear policies to materialize this transformation. AMLO often speaks of “republican austerity” and takes symbolic measures that appeal to his voters, such as selling the presidential plane to fly commercially, as a “normal citizen”. But he has not been able to implement concrete measures to improve the state's purchasing processes or to prosecute corruption. In other words, the discourse against corruption is not followed by new or reinforced institutional procedures to prevent corruption.

5. Signs of the decline of a limited and still weak democracy

The analysts in our conversation express concern about the weakening of democracy in the country. In Mexico nowadays, any form of dissent is met with verbal attacks from the ruling party. Further, there is a risk that there will be non-consensual modifications to the electoral calendar. These risks are obvious but must also be understood in light of the historical weakness of the democratic institutions in the country.