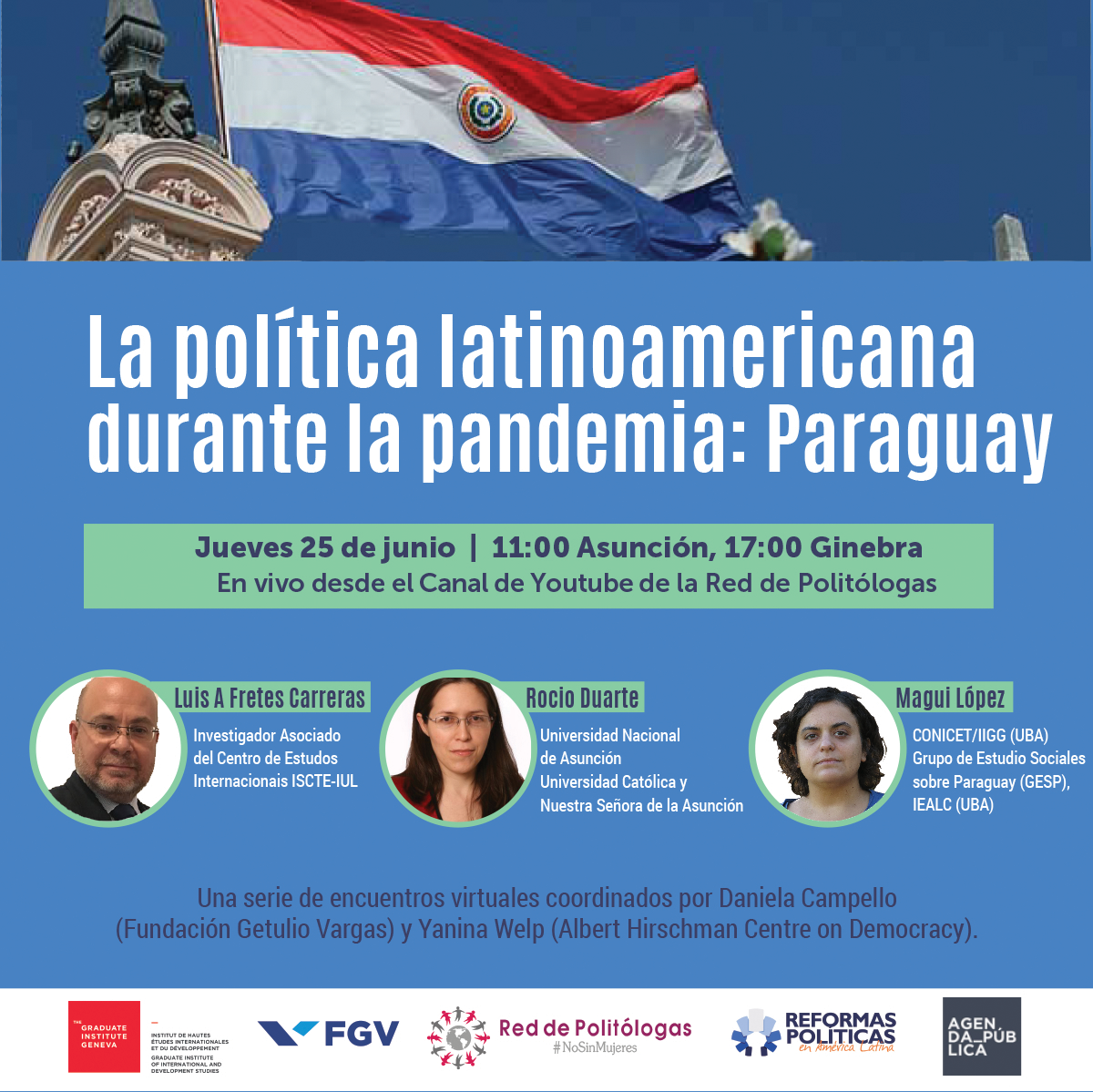 Paraguay has been publicized as a case of success due to the low number of infected with COVID 19' (13 deaths in total, 9 infections per million inhabitants by the end of June), but the peak is expected to arrive in August. Hospital capacities were already 60% occupied due to seasonal illnesses before the pandemic. The experts expressed great concern about growing poverty and the increase in the vulnerable population. At the moment of the conversation, the country is in phase 3, with most of the commerces and services open, also the shops and public offices, although with distancing and care measures. There are differences within the territory with areas that have been once again confined by the growth of infections (in dozens) and others living almost in normality. As for democracy, the experts are divided among the observation of a decline caused by the management of the pandemic and the negative view of a situation that was previously already worrying. They coincide in evaluating very negatively the incidence of corruption and patronage, as well as the repressive culture that manifests itself in institutional violence.

1. Local culture of cleaning and caring and previous learning form other epidemics

In February, thousands of Paraguayans were affected by dengue (an epidemic disease produced by a mosquito, with high incidence in South American countries) and the health system was collapsed. Reports talk about 170,000 infected during 2019. The management of this epidemic would have generated learning and communication circuits that would have been well activated now.

Contrary to some explanations that have attempted to account for the slow progress of contagion in the country, analysts discard the explanatory weight of isolation and rurality: Paraguay has an important exchange with the countries of the region, particularly Argentina and Brazil; and the population density of the Asunción metropolitan area is similar to that of the Buenos Aires metropolitan area.

Magui Lopez highlights that “Paraguay reaches the pandemic with the resources it has, not with the ones we want it to have. It has an underfunded health system, crossed by micro-corruption, poorly distributed in the territory and with poor quality of services ”.

The government has been effective in its communication policy, which is based on previous learning, but does not provide sufficient aid to alleviate the serious economic situation, which makes confinement less effective when many sectors of the population must go out to get their daily living.

“The government has generated policies without convening the scientific community or the parties, a communication and a military decision-making process have been assumed. Governors and mayors do not participate. Communication is centralizing and authoritarian”, says Luis Fretes

3. The financial aid is insufficient

The government implemented economical aids but are not enough. This created a vicious circle because people who work in the informal market (70% of the population) took to the streets and the security forces applied repressive measures. This institutional violence is not restricted to Paraguay, but needs to be marked as a regional weakness.

The Paraguayan economy is characterized by a high level of self-employment and informal workers (70%), which makes confinement measures difficult. The government approved exceptional aid almost immediately, but it has not been enough.

4. In the absence or weakness of the state, civil society organizations are activated

Rocio Duarte underlines the role of grassroots organizations, which have shown great deployment to go where the state does not arrive, allowing people to respect the quarantine. Basically what works is the provision of food.

A sector in a situation of great vulnerability is that of Paraguayan workers who are in Brazil or Argentina and who cannot return or return only if they have the resources to pay for the required quarantine in hotels in Asunción. Those who get free seats from the state are subject to institutional violence and increased chances of contagion because the conditions in many shelters are not met.

The congress, in the opinion of Luis Fretes, has abdicated its responsibilities. The government has made decisions without going through democratic controls to decree the emergency, approve financial aid and organize purchases for the health system.

Duarte and López point out that it is not possible to speak of a decline in democracy because the quality of Paraguayan democracy had not reached acceptable levels. They all agree in highlighting the high levels of corruption that have soared further with the implementation of purchasing procedures by fast routes and without controls. Civil society is activating new waves of protest and social claims which could eventually help to improve democracy.