The politics of El Salvador in the pandemic

The conversation on El Salvador took place on October 08, 2020, with the participation of Nayda Acevedo (Red Politólogas) and Luis Mario Rodríguez (FUSADES).

The events are coordinated by Daniela Campello (Getulio Vargas Foundation) and Yanina Welp (Albert Hirschman Centre on Democracy). Picture of the event. 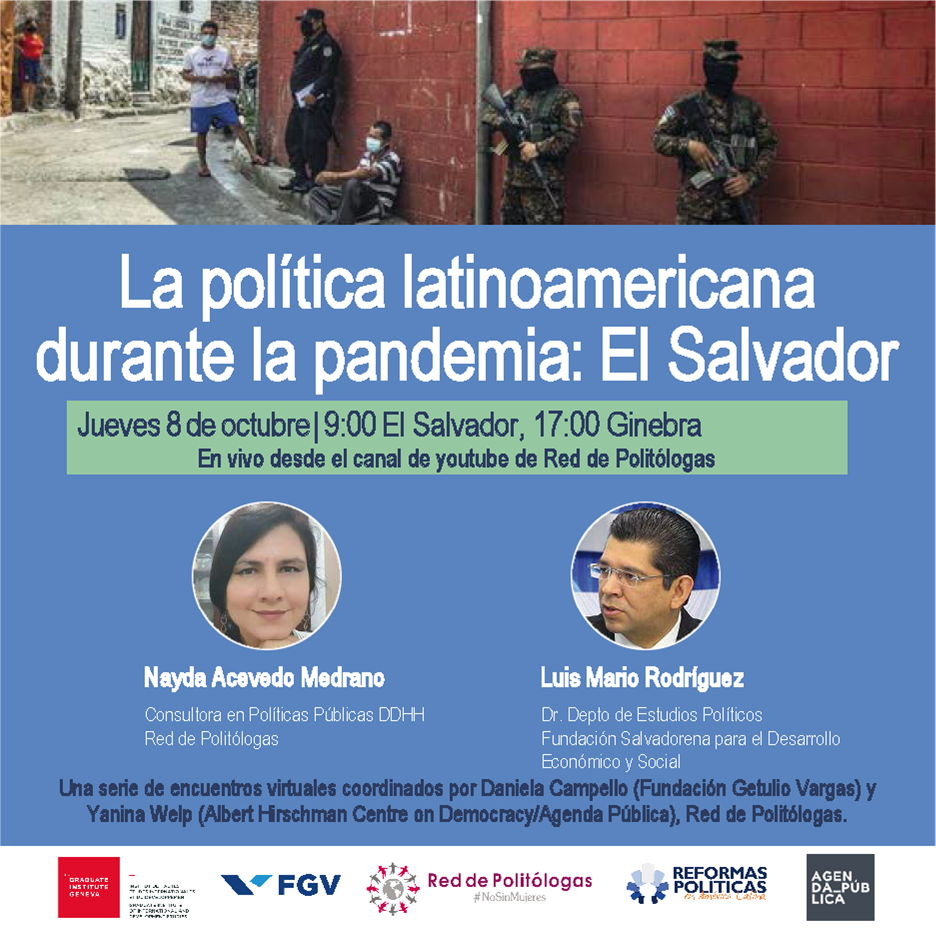 Nayib Bukele took office on June 1, 2019. President Bukele (who was born in 1981, and is an intensive user of Twitter and other social media) is not an outsider: he was elected mayor of the Nuevo Cuscatlán municipality in 2012 and, in 2015, of San Salvador, the capital, for the Farabundo Martí Front for National Liberation (FMLN) party. In the 2019 presidential campaign, however, he triumphed with a sharp 'anti-elite' and 'anti-political' discourse and defeated the traditional parties with a new political organization, GANA. The new coalition does not have a majority in the legislature and has thus developed a confrontational strategy. On February 9, the dispute reached such intensity - the parliament did not approve a measure requested by the executive - that Bukele sent the army to force the vote. This fact is taken as a tuming point for the country. Just weeks later, the pandemic begins. The president took exceptional measures that have the support of the legislature but through procedures that the Supreme Court later suspended as irregular. The country has a long tradition of patronage, corruption and poor institutional performance. The political situation is highly critical and the economic crisis has only aggravated it.

1. A concentration of power in the presidency ... and a clash between powers

The state of emergency was declared in El Salvador days before the first case was detected. This is something that received much attention from international media, after the institutional crisis of February 9. The legislature supported it but did so through a process that was later considered irregular by the Court of Justice. There is tension between powers because, whilethe president says he takes the tribunal decisions into account,  he then speaks against this power and does not actually comply with the sentences.

The phrase is from Nayda Acevedo, who maintains (and at this point both experts agreed) that clientelistic practices, militarization, corruption, or nepotism are not new in the country. The novelty is that profound changes were promised but do not materialize beyond a confrontational discourse. For Luis Mario Rodríguez it is most worrisome that opinion studies, such as those of LAPOP and Latinobarómetro, coincide in identifying low support for democracy in the country. People are dissatisfied and reject institutional corruption. As a result, this opens the door to the emergence of populist leaders.

3. Subnational elections on the horizon for 2021

Municipalities have played an interesting role in the context of the crisis. They have been important political forces. 2021 will feature elections and the president is working on building a political party called 'New Ideas' which might allow him to gain greater force later in the legislature as well.

Nayda Acevedo points out that opposition against this move argues in favor of  democratic practices, as opposed to adictatorship that hardly reaches the population. There is elitist participation in political partieswhich does not correspond to the needs of ​​the people they preach to.

4. Extensive support for the president

Financial support measures for the population have been taken, with a subsidy of USD 300 and funds for food packages. These measures are part of the pre-existing clientelist practices, although with a change of actors. The president's confrontational strategy marked its entire management, as well as the management of the pandemic. For example, the medical college initially supported the government’shealth management policies but then backed away after questioning the data. Right now there is a lot of uncertainty regarding the evolution of the pandemic. Most people trust the president because he communicates clearly and directly and he denounces the corrupted practices of the pastHowever, there is a growing concern about outcomes because the government is not improving the social and economic situation while eroding democratic institutions even more.

5. Economic, political and social crises accompanied by a migration crisis

The drop in GDP is remarkable (8-9%). Luis Mario Rodríguez also points out the negative consequences that the return of thousands of Salvadorans who are held in different places by the pandemic will have and that will add even more pressure to the current situation. The weak professionalization of the public sector is emerging as a problem for the post-pandemic stage due to the lack of qualified personnel to solve the problems that the pandemic is generating and will generate.

Link to the full event in Spanish: https://www.youtube.com/watch?v=TqaE3Ca4N8E