The politics of Guatemala in the pandemic

The pandemic caused by the spread of covid-19 and the economic consequences of the measures taken to mitigate it are putting Latin American political systems in tension. Our series of webinars  explore the effects of the crisis on democracy and state-citizen relationships across countries. 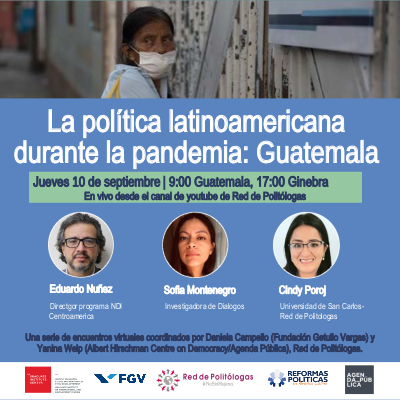 With a population of 17 million, by early September, according to data from the Ministry of Health, there were 7,800 cases and 289 deaths.Four weeks after, according to the database of John Hopkins University there are almost 100,000 cases and 3,400 deaths. Thisonfirmed what the experts in our conversation were worried about: the situation was out of control. The government declared a state of exception (‘State of Calamity’, according to the legal framework) and requested loans in order to have resources aimed at strengthening the health system and expanding social protection. Although the funds were granted, budget execution has been rather low, below 20%. During our webinar, analysts agreed that this accounts for several structural problems, particularly the lack of human resources prepared to design and implement policies. Furthermore, the situation is aggravated by a precarious health system, high levels of corruption, poverty, and violence.

1. The President quickly declared the “State of calamity”

Newly elected president Alejandro Eduardo Giammattei (Vamos) took office on January 14, 2020. In March he immediately took action to counter the threat of the pandemic. Similar to other Latin American countries, action was taken even before the first cases were confirmed. The executive declared the State of Calamity. Despite the speed with which the legal framework was activated to promote policies aimed at suppressing the spread of the virus in the health and social spheres, structural obstacles prevented its proper functioning. These include the weakness of state capacities and in particular of the social protection system. Corruption and violence are also part of the structural problems facing the country, as well as the clientelistic strategies that sustain political parties.

2. The main problem is not the lack of resources but the low state capacities

President Gianmmatei redirected loans previously requested and requested new ones, which were endorsed by Congress and granted by credit institutions. The first loan approved was for US $ 200 million with the World Bank. The available credit was programmed for natural disaster management policies but was redirected to pandemic management. The second loan came from the InterAmerican Development Bank (IDB) for US $ 250 million. It appears to be aimed at strengthening the tax system and fiscal transparency. Finally, in June, the International Monetary Fund (IMF) approved an emergency loan of US $ 594 million for the country to face “urgent balance of payments needs derived from the pandemic” of COVID-19. During our conversation, Sofía Montenegro highlighted that unconditional cash transfers in kind reached around 11.7 million inhabitants on paper (this without taking into account the credits granted to small and medium-sized companies), which represents approximately 69% of the Guatemalan population. This is anunprecedented figure for the country. However, budget execution is very low, below 20%, due to ignorance and / or incompetence. Aid to families and companies was approved, but, in practice, it rarely reaches its intended beneficiaries.

In 2018, the expenditure in social protection barely reached 1.2%, well below the regional average of 4.1%. The government declaired confinement was mandatory because hospital capacities are low and are concentrated in Guatemala City. Medicines are expensive. Hospitals are not prepared. Out of fear, the population initially complied with the confinement but, after a few weeks, this was was no longer an option for informal workers. Experts pointed out that the aid does not reach the most vulnerable population but is instead received by the municipalities with the lowest incidence of poverty, which are generally urban. This is the case of Family Bone (Bono Familia). In addition to leaving the most vulnerable population unprotected, this accentuates pre-existing inequalities.

4. Shift from a paradigm of control to that of personal responsibility

Faced with the ineffectiveness of his policies and the decline in his popularity, the president changed his cabinet. With his social support declining, he has abandoned the management of the pandemic to focus on the economy. "No more tests are done, confinement is not recommended, hospitals are not equipped," warned the analysts during the webinar. We have also been observing this trend in other countries in the region such as Costa Rica and Paraguay, in which health management is neglected and the discourse of individual responsibility has become a political slogan.

5. The drama of immigrants

Another hot topic is that of migrants, which in turn increases economic precarity of families dependent on receiving money from their relatives working abroad. Cindy Poroj has pointed out that approximately one million Guatemalans reside in the United States from where they sent resources to their families. The economic drama is added to the human ordeal faced by people who have stayed at different borders as well as by undocumented people who remain without access to basic protection and health services.

Link to the full event in Spanish: https://bit.ly/3ikL90f