The risk of democratic backsliding in Latin America during the pandemic

Graduate Institute Alumna Dinorah Azpuru, Professor of Political Science and International Relations at Wichita State University in Kansas, United States, contributes to the Democracy Centre’s commentary series on democratic experiences in the age of pandemics. Exploring political impacts, she suggests that the type of leadership, especially in countries with presidential systems like those in Latin America, is key to gauge the risk of democratic backsliding.

In the last three months, the COVID-19 pandemic has spread throughout the world after its origin in China. Health professionals have focused on avoiding massive contagion and mitigating the disease; economists have focused on the colossal impact of the pandemic on macroeconomic indicators and unemployment; other professionals in the social sciences have warned of the tremendous impact of the pandemic on social indicators, particularly the expansion of poverty in developing countries — including Latin America.

Political scientists have focused on the assessment of the responses to the pandemic of diverse leaders and different types of government around the world. For example, whether federal systems have more difficulty imposing measures to contain the pandemic than unitary systems. Also if the countries with greater state capacity are more successful in fighting the pandemic. One of the recurrent themes has been the comparison of responses to COVID-19 of countries with authoritarian or hybrid regimes vs. those with democratic regimes. Political scientists have also warned of the danger of further corruption and autocratization, as well as the threat of increasing populism.

However, the political impact of the pandemic in a global or regional comparative perspective has not been thoroughly addressed, largely due to the lack of political indicators that make such a comparison possible. That is why the new Pandemic Backsliding Risk Index recently presented by the V-Democracy project is relevant. This index aims to “track state responses to the Covid-19 pandemic as illustrative of the varieties of emergency measures and their execution, addressing how these decisions affect short- and long-term prospects for the political regime and democracy.” This new measure identifies countries that are at low, medium or high risk of democratic decline during the pandemic, using three colors on the map published by V-Democracy: low-risk countries in green, medium-risk countries in orange and countries with a high risk of democratic backsliding are in red.

The methodology used to build the Pandemic Backsliding Risk Index is complex. The following components stand out: if freedom of expression has been restricted by the measures taken by the government during the pandemic; if the power of the Executive branch has expanded without oversight; if limits have been imposed on the legislature and the judiciary; if non-derogable citizens’ rights have been revoked; if discriminatory measures have been taken against certain groups; if emergency measures have been imposed arbitrarily or with abuse of power; and if there are limitations on electoral freedom and fairness (it is important to note that the postponement of elections per se is not considered a negative measure under the current circumstances).In the case of Latin America the results are interesting. Five countries are classified as low-risk countries: Chile, Ecuador, Guatemala, Mexico, and Uruguay. Seven countries are located in the medium-risk category: Argentina, Colombia, Costa Rica, the Dominican Republic, Honduras, Nicaragua, and Panama. Finally, six countries are classified as countries at high-risk of democratic backsliding due to the pandemic: Bolivia, Brazil, El Salvador, Paraguay, Peru and Venezuela. As can be seen in Figure 1, the countries with a low-risk of democratic backsliding during the pandemic are not necessarily the most democratic countries in the region, but the risk of backsliding is lower given the measures taken to mitigate the effects of the pandemic. Figure 1 ranks countries according to the V-Democracy Liberal Democracy Index. According to this Index, Costa Rica is the country with the highest level of liberal democracy in the Latin American region, and Venezuela and Nicaragua the countries with the lowest degree of liberal democracy. The scale of the Liberal Democracy Index ranges from 0 to 1 point. The colours of the bars identify which countries are at low, medium or high risk of democratic backsliding during the pandemic. Cuba is not rated because it is considered an autocratic country. There is no information for the case of Haiti. 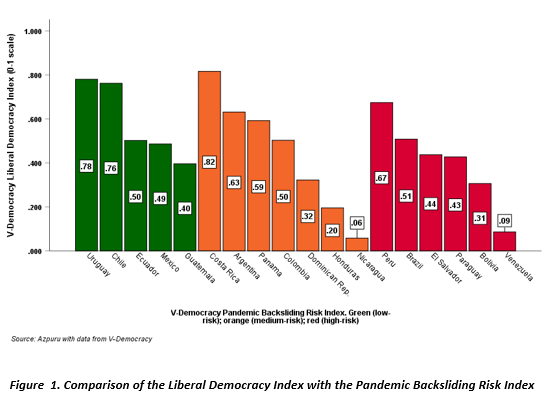 Beyond the V-Democracy Pandemic Backsliding Risk Index, other quantitative measures can help obtain a comparative perspective. The type of leadership during the pandemic, especially in countries with presidential systems like those in Latin America, is key. Some companies like Ipsos and Mitofsky carried out surveys (with small samples) between the end of March and the beginning of April that can give an idea about the approval of the actions taken by each Latin American president during the pandemic. Table 1 compares various indicators in each country: the Index of Liberal Democracy, the Pandemic Backsliding Risk Index, the percentage of citizens who approve of the performance of their president during the pandemic, and an indicator from the Americas Barometer which measures citizens’ support for shutting down Congress/Parliament during difficult times (a risk that can increase when leaders with dubious democratic credentials perceive high levels of citizen support).

It is important to highlight some points based on the results of Table 1. Among the five countries with low risk of democratic backsliding due to the pandemic, the levels of liberal democracy are high (Uruguay and Chile) or medium (Mexico, Ecuador and Guatemala). The percentage of citizens who support the actions taken by their president against the pandemic is also relatively high, with the exception of Ecuador. The President of Guatemala, who has also been positively evaluated by some journalists, stands out in this group. Support for an executive coup is very low in Uruguay, and relatively low in the rest of the countries in this group.

Among the countries with medium risk of democratic backsliding during the pandemic, the Liberal Democracy Index is high in Costa Rica and medium in Argentina, Panama and Colombia. However, in three countries in this group—the Dominican Republic, Honduras and Nicaragua—this this index is quite low, especially in the case of Nicaragua. There is no information about presidential approval in three of the Central American countries in this group, although a survey by the University of Costa Rica indicates that the president of that country had 65% approval in April of this year. The Presidents of Argentina and Colombia have midlevel approval ratings, and the President of Panama has low levels of approval. Regarding support for an executive coup, in 2019 a quarter of the population or less in this group of countries, said that they approved of the president closing Congress/Parliament when the country faces difficult times.

Finally, with regard to the last group of six countries at high-risk of democratic backsliding due to the pandemic, there are cases that are concerning. In Peru, the Liberal Democracy Index is relatively high, as is the approval of the president's performance during the pandemic; but it is concerning that the measures that have been adopted to combat the pandemic place the country among the high-risk countries; this, together with the high support for an executive coup (59% of citizens in 2019) may forewarn future problems for democracy in that country. The case of Brazil is alarming: although the country achieves a medium score in the Liberal Democracy Index, the level of presidential approval is extremely low, and recent problems in domestic politics do not predict democratic stability in the immediate future. El Salvador is also a delicate case by virtue of the questionable measures adopted by the current president against the pandemic, and the high level of approval by the population. Bolivia, on the other hand, faces the pandemic in the midst of a total reconfiguration of the political system; the Liberal Democracy Index is quite low, and there is uncertainty about when the presidential elections may take place, without clarity as to who could make it to the runoff election. Finally, the most worrisome case in Latin America is undoubtedly Venezuela. The country’s score in the Liberal Democracy Index is extremely low, and so are the current levels of support for the president. Faced with the pandemic, the government has adopted drastic measures of an authoritarian nature. Despite the fact that all the political, economic and social indicators are abysmal, there is no indication of a short or medium-term solution to the crisis in Venezuela, which has deteriorated even further with the drop in oil prices in recent weeks. 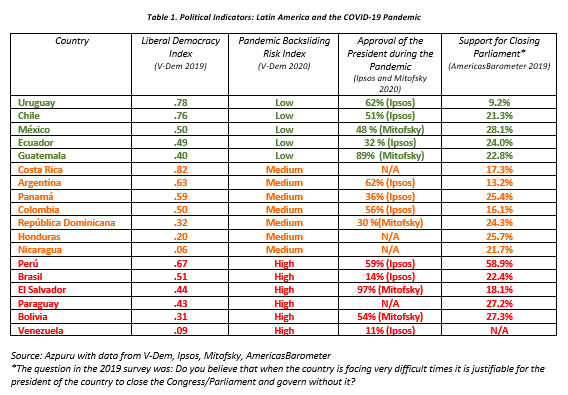 Dinorah Azpuru is Professor of Political Science and International Relations at Wichita State University (in Kansas, United States).  She also serves as Director of the Guatemala Program for the Latin American Public Opinion Project (LAPOP) at Vanderbilt University. She specializes in quantitative research on democracy, particularly survey research in Latin America. She has a Ph.D. in Political Science from the the University of Pittsburgh in the United States, and is an alumna of the Graduate Institute (Certificate in Development Studies, Institut universitaire d'études du développement (IUED), Academic year 1985-1986).