States, Borders and Covid-19: A View from the Italian-Slovenian Borderlands

President, Board of Directors, Geneva Centre of Humanitarian Studies

What does Covid-19 reveal about states and borders? To what extent does the current emergency lead to processes of national reterritorialization across Europe? In their contribution to our series on democratic experiences in the coronavirus pandemic, Alessandro Monsutti, Professor of Anthropology and Sociology and Affiliate Faculty of the Albert Hirschman Centre on Democracy, and Stefano Morandini, Senior researcher in the SNF project “National Borders and Social Boundaries in Europe: the Case of Friuli” analyse political and popular reactions across Italy and Slovenia.

“The then Foreign Minister [of Slovenia] came to my house and made me this proposal… fill in this document and we’ll give you Slovenian citizenship, so I would have had two citizenships… [But] I have one and that’s already too much for me, I’m a citizen of the world and I don’t need anything [else]... I am part of the Slovenian minority [in Italy], here is my family, we speak Slovenian, this does not mean that I must also have Slovenian citizenship. If I could do without having the Italian one and living here... but we cannot do this, we must be certified from somewhere…”

Interviewed on 13 December 2019, Josko Gravner, a winemaker famous worldwide for his wines fermented in clay amphorae, expresses a double ideal: an attachment to his language and local roots, and a global feeling of belonging. His supranational and anti-state sensitivities were in the zeitgeist. We met him while conducting a research project supported by the Swiss National Science Foundation on the border between Italy and the former Yugoslavia (National Borders and Social Boundaries in Europe: The Case of Friuli, Ref. 175708). We focus on a region mostly populated by Slovenian speakers, who were subjected to forced Italianization under the Fascist regime and faced a climate of widespread suspicion during the Cold War as potential Tito sympathizers. Our goal is to document how everyday life has been dramatically transformed since the fall of the Iron Curtain, the breakup of Yugoslavia and the integration of Slovenia into the European Union. People were at last free to cross the border and reactivate ancient social and economic ties. The demarcation between two erstwhile political worlds was almost eradicated from the landscape. 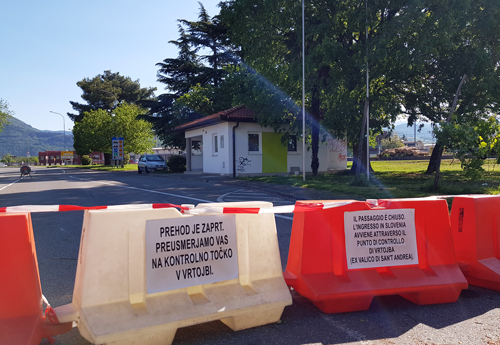 But that was before Covid-19! Between February and March 2020, Italy emerged as the main site of infection in Europe. On 10 March 2020, the Slovenian government announced the closure of the border with its Western neighbour. Over the following days, small border posts scattered across the region were sealed with cement blocks or boulders, images never seen even in the 1960s, 70s or 80s, when local people had laissez-passers allowing them to move back and forth. Long-forgotten scenes were again in evidence at larger transit points: lowered barriers, stringent controls and endless line-ups of trucks and cars. All over Europe and beyond, we observed a dramatic national reterritorialization, in sharp contrast with the rhetoric on open borders and transnational collaboration that until recently prevailed. It appears not only that international borders remain significant in today’s world but also that they have proven easy to close. And with tight controls at the edges of European countries came quickly expanding measures of surveillance within nation-states.

The political and popular reactions to the pandemic force us to adjust our working hypotheses. What does Covid-19 reveal about states and borders? A nuanced approach is needed, as different states have adopted different responses. Italy applied the same measures over the whole national territory, irrespective of the number of confirmed cases in various regions, rigidly locking down the whole population. Slovenia adopted another strategy, closing its external borders while the possibility of suspending the Schengen Agreement was still under discussion in Brussels. Closure of people in their houses and closure of the territory at its perimeter appear as the alternatives adopted respectively by the two neighbouring states.

We asked Valentina Stincone, an architect from Friuli who has lived and studied in Ljubljana for many years, to tell us about the situation in the Slovenian capital. We discovered that fear knows no boundaries and that supermarket shelves were assaulted everywhere, with similar images being shown on television from Ljubljana and Milan to Geneva. Apart from the interruption to public transport services and the closure of public offices (except post offices and banks), the measures implemented by the Slovenian government did not affect the freedom of citizens as greatly as in Italy. However, churches remained closed during the Easter period, something which had never happened since the Second World War. In early May, a crowd of cyclists violating the ban on gathering challenged the authorities by parading in front of the Parliament in a protest against a scandal relating to the government’s speculative purchase of low-quality respirators and medical equipment. The end of the emergency was declared on 18 May and students were allowed to return to schools to take their exams. National borders were eventually reopened on 12 June.

On the Italian side, we observed the reactions that the closure of borders by Slovenia triggered among the inhabitants of the Natisone Valleys, one of the Slovenian-speaking areas of Friuli, many of whom look to Ljubljana as their moral and cultural capital for safeguarding their rights and language. At times, we perceived a feeling of double betrayal and isolation. Some interviewees stressed that the Italian state had put in place a highly coercive regime with no proven effectiveness in terms of public health, cancelling all cultural events and confining people in their homes. But many others felt at odds with the decision taken by Ljubljana. It is a “moral blow”, commented Michele Obit, editor of the weekly newspaper Novi Matajur, distributed among Slovenian speakers from the Province of Udine, a reminder of the “darkest moment of the second post-war period.” At least two of our interviewees, of different ages and educations and with a different ability to access information, regretted having momentarily lost access to Slovenia, while they expressed disapproval of the undifferentiated lockdown implemented by the Italian state across different regions. They questioned the legitimacy of the measures suspending the democratic freedoms protected by the Constitution in Friuli-Venezia Giulia, a region with a low level of positive cases and deaths. They described Covid-19 as a false emergency, a paradoxical return to old forms of control through the spread of fear and suspicion, reminiscent of the Cold War period when this borderland was subjected to tremendous pressure. Indeed, Josko Gravner’s ideal of a world where the presence of states becomes progressively negligible has been under severe strain during the pandemic. But it is still difficult to anticipate what the lasting consequences of Covid-19 will be on states and borders, and on surveillance within nations and at their borders.

Alessandro Monsutti and Antonio Donini’s article published in the special issue of Global Challenges on “The Politics of the Pandemic” produced by the Albert Hirschman Centre on Democracy:

Pandemic as Revelation: What Does It Tell Us about People on the Move? Global Challenges, Special Issue no. 1, June 2020