The case of Uruguay was on focus on June 18, 2020, with the participation of Constanza Moreira (University of the Republic) and Alicia Lissidini (National university of San Martín and Red de Politólogas). 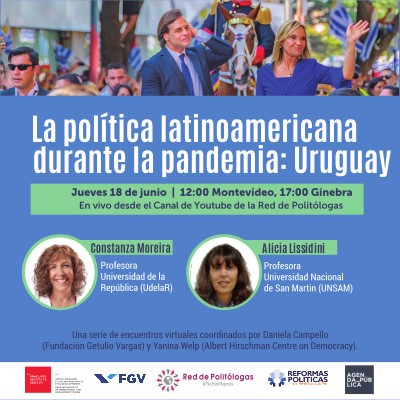 President Luis Lacalle Pou (National Party), leader of a right-wing coalition that includes a new far-right party, took office on March 1. This produced alternation after fifteen years of governments of the Broad Front (center-left). The pandemic occupied the political, economic and social agenda practically from his first week in office. The administration acted very quickly tracking and isolating infections with a success that is explained by the combination of factors such as: the strength of the health system, the fast action based on the advice of experts, the low demographic density of the country, an effective communication strategy that is combined with the 'collective responsibility' demonstrated by the population and the relative political consensus reached by main parties. A very outstanding element is that no state of alarm was decreed and the confinement took the form of a recommendation, not as an obligation. Schools were closed and massive public events were suspended. At the time of recording the conversation, a total of 25 people had died. No new infections were detected for more than two weeks and the schools had reopened. The industries did not stop at any time. As negative elements, the analysts highlighted both the approval of a package of laws that restrict freedoms and drive to structural reforms through a fast process despite are not related to the pandemic as well as the insufficiency of economic measures in a situation of severe crisis.

The early development of a public health system in Uruguay, added to the low population density and the culture of self-compliance, guaranteed the success of the confinement. The government's strategy worked to the extent that fear to get infected fueled collective responsibility. Harvesting did not stop, nor did the industry. It avoided the pressure from entrepreneurship observed in other countries. Now, churches and artists are pushing to reopen their activities, criticizing that shopping malls reopened but did not reopen other social activities. Schools closed for a few weeks and were already operational at the time of the conversation. Rural schools opened earlier and the rest were organized in a scaled way, with measures of social distancing. The opening is gradual and staggered.

2. Relative political consensus, the state of alarm was not decreed

Although public events and classes were suspended, there was no state of alarm declared. The government took office on March 1 and the first measures to counter the pandemic were approved on March 13. Argentina took strong confinement measures, which greatly affected Uruguay economically but prevented the country from having to take strict measures on a border that was already closed. With Brazil it has been more problematic and the military has been sent to guard the border. The alarm was not declared because there was no legal framework to do so. The government put together a committee of university advisers who made a series of recommendations about what could and could not be done that instilled confidence in management.

3. For the economic crisis, insufficient aid

The experts in our conversation highlighted the considerable increase in poverty and unemployment that is expected to increase inequality. A 'coronavirus fund' has been created based on the reduction of public wages while the interests of the businessmen and the great fortunes have not been touched. Against the mainstream policies addressed to increase expenditure, the accompanying measures in the midst of the pandemic in Uruguay have been the increase in public tariffs and the decrease in state spending. Direct or indirect aid has been exclusively targeted at companies. There is no basic income and there was no increase in protection for the vulnerable groups.

4. Approval of laws not related to the pandemic by fast track procedures

The government assumed with the promise of a very important package of reactive laws (restriction to strikes and protests, limitations to the freedom of information, among others) and the shrinking of the state (reduction of public officials) that is now conducted by fast procedures, despite is not related to the management of the pandemic. The 'law of urgent consideration' implies that if it is not agreed and voted within 45 days, it is automatically approved. There is no reason to adopt this procedure, beyond the risk of not having the votes considering that the government coalition is diverse and could be not stable along time.

Prof. Moreira points out that three aspects are the most worrying, first, the adjustment that the law entails, which will imply an impoverishment of the state. Second, security issues, which account for the advancement of an agenda that enables higher levels of institutional violence. Third, all ministries are forced to reduce their budget with the exception of the defense ministry.

Prof. Lissidini shows concern about the progress of a narrative that penalizes poverty as if it were the result of individual options and not of structural conditions and the erosion of the necessary process of deliberation, something with put at riks the uruguayan democracy, she considers.

Link to the full event in Spanish:  https://www.youtube.com/watch?v=euJlCnNWHRc