Venezuelan politics in the pandemic

The pandemic caused by the spread of covid-19 and the economic consequences of the measures taken to mitigate it are putting Latin American political systems in tension. This series of webinars delve into the analysis of each country in conversation with prestigious local analysts. This initiative has the backing of the Graduate Institute, the Getulio Vargas Foundation, Red de Politólogas, Agenda Pública and the Observatory of Political Reforms in Latin America. 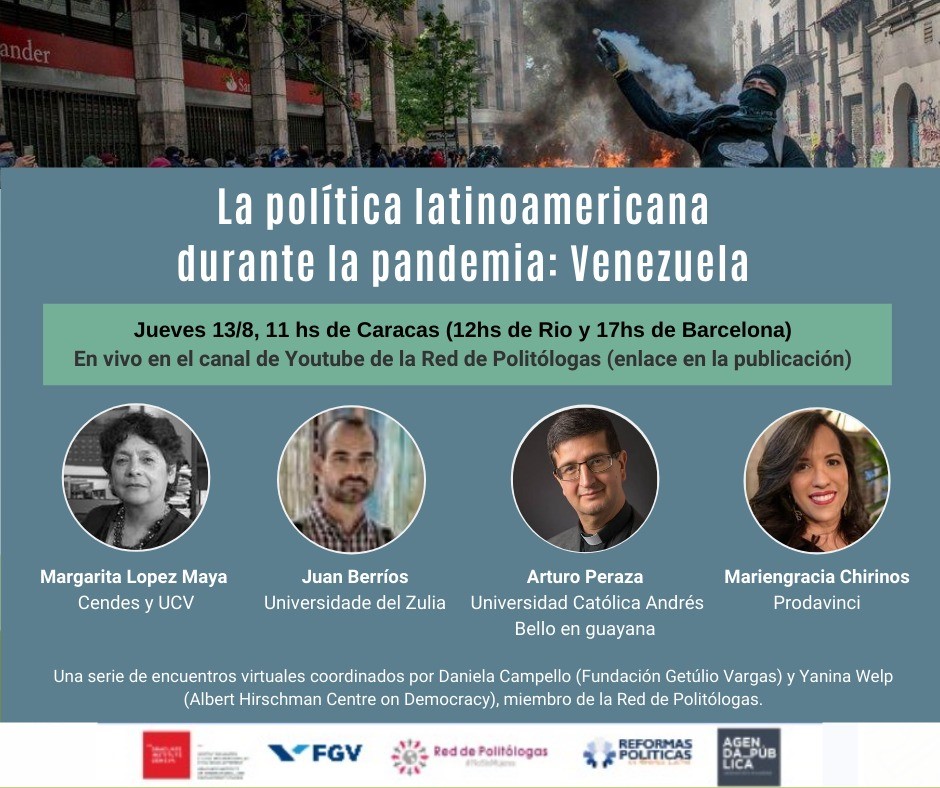 While the spread of covid19 continues to rise in the world and in most Latin American countries, in Venezuela figures of contagion are low. The government of Nicolás Maduro, on the one hand, unfolds a heroical narrative that explains it as a result of his good management, and on the other hand, he orders the persecution of anyone –doctors, journalists, members of NGO’s or academic researchers– informing about facts that contradict this official narrative. The analysts in the conversation warned about the constant deterioration of the state. Management is focused almost exclusively on achieving the own survival of the elite in power. The humanitarian crisis had already been denounced before the pandemic (for example by the United Nations report led by former Chilean President Michelle Bachelet) and has now worsened. The crisis includes an economic dimension, a health dimension, and the humanitarian one faced by forced migrants who have remained in different parts of the border (trying to leave or return). This has contributed to a further increase in illegal activities and violence. The government lets the mafias operate, as they serve their goal of keeping the population scared. The country is immersed in the global geopolitical dispute and is a beneficiary of aid from China, Russia, Iran, and Cuba, but this aid is inserted into government inefficiency and corruption and does not reach the population. The opposition, divided and unable to develop a narrative or an exit strategy, does not provide solutions. The short and medium-term prospects are negative.

1. The survival of the elite in power as the main goal

There are no policies aimed at suppressing the pandemic: the data is not reliable, journalists and doctors are persecuted if they denounce or just report events that the government prefers to deny and hide, informs Mariengracia Chirinos. Health and economic assistance are organized around the ‘Carnet Patria’, which is nothing more than a reinforcing of the strategy of social control. The only need to promote this national card in a country where there were an identity document and records is to force adherence to the government and the party by accessing to public goods. Specific policies to contain the contagion are reported on Sundays via Twitter and must be implemented on Monday, there is no time to organize and comply with them. The decrees are confusing, contradictory, and poorly written, there is no coordination between municipalities, states, and the central government.

2. Selective militarization and the growth of organized crime

There is a ‘selective militarization’. In areas like Maracaibo the markets are crowded, nobody wears a mask, there is neither distance nor follow-up of other sanitary measures recommended by the WHO. Analysts point out that there is a ‘government’ (elite in power) but no ‘a state’ (bureaucracies dealing with the normal organization of the society). Many public offices have been closed for months. The public sector is deactivated and there is a situation of anomie and exceptionality. In many sectors of the country, mafias proliferate, doing the ‘dirty work’ and instilling panic in the population, protected by the police and the military, says Arturo Peraza.

3. The social, political, and humanitarian crisis

The vulnerability of the population is extreme. The country is barely supported by its people, who are absorbed in pressing problems such as violence against women (triggered during confinement), food, children's education, and health. The millions of displaced Venezuelans are in a situation of helplessness aggravated by the state crisis. They cannot renew passports for instance and are abandoned in hands of mafias.

4. The opposition does not propose a strategy nor does it develop a narrative

Right now Venezuela has two presidents and two legislative assemblies. Juan Guaidó has been recognized by more than fifty countries around the world, but he has neither power nor capacity for action. His initiative comes down to seeking humanitarian aid. The entry of the WHO is one of the few achievements, achieved in an agreement with Maduro. For Margarita López Maya, failure to participate in the parliamentary elections announced for December is critically evaluated because those elections - although no one doubts that they will be neither free nor fair - will end the opposition legislature and thus leave all space to the Maduro government. Analysts emphasize that the opposition is divided and has neither a strategy nor a narrative capable of attracting the population.

5. Venezuela is not understood without understanding global geopolitics

An ally of China, Russia, Iran, and Cuba, it receives aid from these countries. It is clear that it is not effective, namely if it is insufficient and/or due to sheer incompetence.

6. What future for Venezuela?

The lack of perspective dominates a highly critical scenario, which citizens face in a situation of enormous helplessness. The four analysts in the reported conversation coincide in observing that the Maduro government, despite its mismanagement and all its weaknesses, clings to power and there is little chance that this will change in the short and medium-term because neither the international nor the national situation (extremely weak opposition and civil society focused on solving their daily problems) feed hopes of democratic restoration in the near future. "It’s increasingly difficult to understand and explain. You see us, we are alive, there is a certain internet connection, but it is a miracle that we are talking", says Juan Berríos.

Link to the full event in Spanish: https://youtube.com/watch?v=6dAf-R