“The Devil is in the Details”

Yanina Welp, Research Fellow at the Albert Hirschman Centre on Democracy, has published a co-edited book "El diablo está en los detalles referéndum y poder político en América Latina" ("The Devil is in the Details: Referendum and Political Power in Latin America”), with political scientist Fernando Tuesta Soldevilla. In the interview below, she reflects on the book’s unique findings regarding the uses (or lack thereof) of direct democracy mechanisms in Latin America, and on how referenda fit in the broader crisis of democracy and in responses to the COVID-19 pandemic. 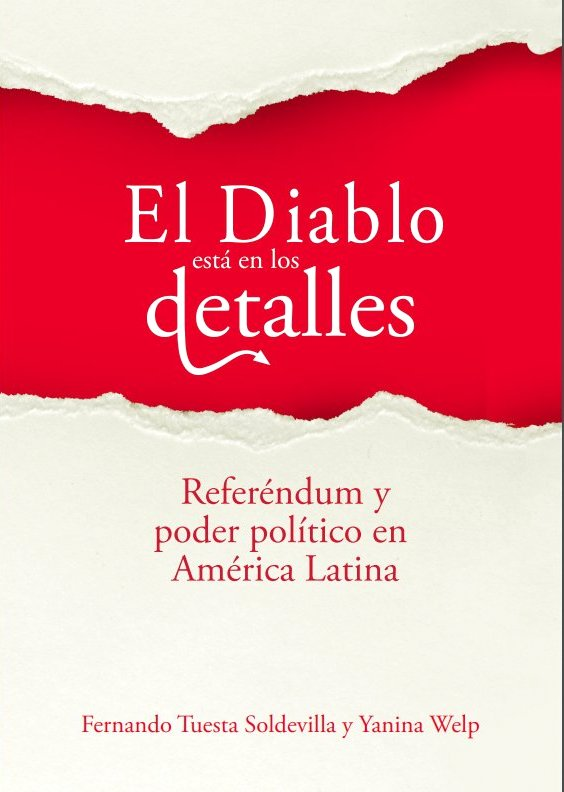 1. You have entitled your book "The Devil is in the Details": can you explain why you chose this title?

A few years after the wave of democratic transitions in many Latin American countries, constitutional reforms and replacements were put in place. They were, among other things, aimed at introducing Mechanisms for Direct Democracy (MDDs) in public decision-making. If in 1970 Uruguay was the only country in the region where citizens could gather signatures to activate a referendum (like in Switzerland), by 2020 similar mechanisms exist in Costa Rica, Honduras, Ecuador, Bolivia, Peru, Colombia, Venezuela and Mexico. In addition, all countries in the region have expanded, to a greater or lesser extent, their regulations on referendums, granting powers to the Executive and/or the Legislature and incorporating mandatory referenda to ratify special decisions. However, with few exceptions, only presidents are successful in activating popular consultations. Furthermore, while this legal change is remarkable, its outcomes have typically been erratic, scant, or downright negative. The only country where, at the national level, frequent, legal mechanisms that channel citizen demands (understanding this as an expansion of the political debate, with the possibility of advocacy regardless of the final result) is the old-user, Uruguay. Why these results? Why do citizens continue to prefer taking to the streets, while MDDs continue to be perceived as a ‘dead letter’ or a weapon of the Executive? Is the cause ignorance? A lack of organizational capacity? Or is there something else going on?

In 2018, on the occasion of a referendum promoted by the (now former) President of Peru Martín Vizcarra, I met a group of colleagues in Lima to analyse these questions. We suspected that restricting the study to activated referendums was not serving us well, and that we therefore also had to analyse failed attempts. We suspected that the story included open cheating sometimes and sometimes more subtle forms of subverting (in Hirschman’s terms) the expected results; hence, “the devil”, and that at least part of these was made possible by the definition of the procedures. In her chapter on Costa Rica, Ciska Raventós reformulates with great precision the title of this book to state that "the devil is where the rules are defined and applied". In other words, the requirements and the activation procedures - such as the independence and adherence to the law of the institutions in charge of them - are key to determining the performance of popular consultations. It is evident that it is not enough to mention or list mechanisms in a constitution; what really makes the difference is the specific regulation as well as its implementation. This makes the difference between a mechanism that allows opening the agenda, as in Uruguay, or, as in the case of Peru, maintains the power of Congress if a proposal is politically evaluated and rewritten by the Legislative. Such citizen initiatives indeed run the risk of being blocked or distorted by the parliamentary intervention. The constant blockage of citizens' activation in several other cases became evident when looking at failed attempts. This showed the extent to which the devil was indeed in the details.

2. Can a larger use of referenda be a response to the broader crisis of democracy? What are the lessons from current experiments in Latin America?

Yes, we can expect MDDs to improve popular support for democratic procedures and reinforce trust and confidence. In other words, this could help respond to the broader crisis of democracy, even though this crisis is not only a crisis of voice but also a crisis of welfare’s provision in terms of accessing to public goods, better living conditions, health services and education among others. Referendums may reinforce democracy but are not an external and ‘clean’ solution, are not activated in a tabula rasa, but are rather conditioned by the legal frameworks and the power struggle observed in a given context. This is evident when observing that MDDs have been used across very different regime types, even authoritarian ones. Still, in exceptional situations even under autocratic regimes referendums do offer room for optimism: the plebiscite in Uruguay in 1980 and Chile in 1988 show that even dictators can be defeated. I have analysed this in depth with other colleagues in previous book entitled: Let the people rule? Direct democracy in the twenty first century. In democratic settings, to prevent the manipulative use of MDDs, many modern democracies have entrusted autonomous institutions like supreme courts, electoral commissions, and other monitoring agencies with supervising some of the more contentious aspects of these procedures. But, and these are the lessons stressed in our book, these institutions need clear mandates, defined responsibilities, suitable oversight and mechanisms of accountability, as well as for the role for political officeholders to be agreed in advance.

3. You have been hosting a webinar on policy responses to COVID-19 in Latin America. Have some of the features identified in the books played out in each countries' ability to respond to the pandemic?

In general, the mechanisms of direct democracy have played no role. This reinforces the conclusions of our book: without a reform agenda, a better definition of the rules, and political responsibility, the mechanisms of direct democracy do not allow the channelling of citizen demands. Because it is clear that they can do it, and here the two regional exceptions to what I have commented emerge: Chile and Uruguay. Chile conducted a plebiscite on October 25 that approved the constitutional change, channelling long-standing demands and enormous public dissatisfaction. However, the mechanism was not activated within the framework of the current regulation but within the framework of the agreement between parties, to give an answer to the wave of protests initiated in October 2019. The case of Uruguay continues on its path. The government approved a comprehensive reform package and the unions and some social movements are gathering signatures to veto it. As final remarks, I would like to stress that in Latin America, while the opening up of the political system to include more mechanisms of citizen direct participation was to some extent a response to civil society’s demands for voice it has worked more as a tool for overcoming political deadlocks among elites. This makes evident that the problems democracies not only in the region but around the world face are not restricted to the emergence of extreme-right leaders but are originated by the malfunctioning of the basic democratic agreement. It is time to revise it.

Yanina’s research at the Centre focuses on the introduction and practices of mechanisms of direct and participatory democracy, and digital media and politics, i.e. ‘democratic innovations’. Since the COVID-19 pandemic, she has been co-hosting a webinar on political responses to the pandemic in Latin America. Learn more about Yanina’s projects on ‘Public protests and protest publics in authoritarian regimes’ here and on ‘Constitution-making and deliberative democracy’ here.