The Edgar de Picciotto International Prize was created as a tribute and token of thanks to Mr Edgar de Picciotto. His generous donation of CHF 20 million enabled the Graduate Institute to finance a considerable part of the Student House. Mr de Picciotto and his family have greatly supported and participated in the realisation of the Institute's mission by facilitating the hosting of students from all over the world.

The Edgar de Picciotto International Prize – awarded every two years and worth CHF 100,000 – is intended to reward an internationally renowned academic whose research has contributed to enhancing the understanding of global challenges and whose work has influenced policy-makers.

Over 20 years of research, Professor Sassen has published eight books and is the editor or co-editor of four books translated into over twenty languages. In addition, she has received many awards and honors, among them, multiple doctor honoris causa, the 2013 Principe de Asturias Prize in the Social Sciences, an election to the Royal Academy of the Sciences of the Netherlands and made a Chevalier de l'Ordre des Arts et Lettres by the French government. She has also been a committed and influential participant in the public debate, appearing in many journals The Guardian, The New York Times, Le Monde, Die Zeit, The Financial Times, among others. 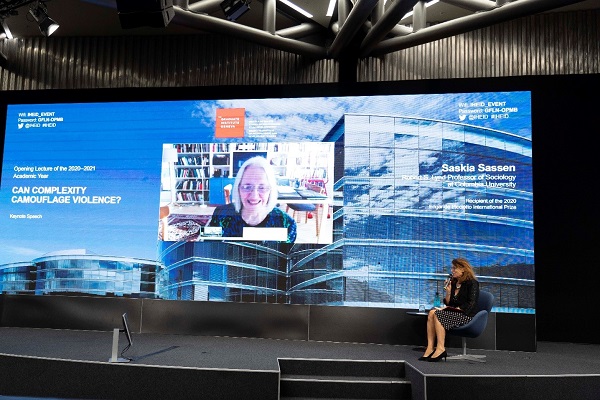 Professor at the Institute for Advanced Study in Princeton, New Jersey from 1985 to 2014, Joan Wallach Scott has received a large number of awards, including honorary degrees from Harvard and Princeton universities.  These distinctions recognise the importance and breadth of her work in the fields of social and intellectual history.

Distinguished Professor of Economics at City University of New York (CUNY), Paul Krugman studies a wide range of economic issues including income distribution, taxation, macroeconomics and  international economics. In 2008, he was awarded the Nobel Memorial Prize in Economic Sciences.

Saul Friedländer is a world-renowned historian. He received his PhD from the Graduate Institute and has taught at the Hebrew University of Jerusalem and Tel Aviv University. Since 1988, he has been Professor of History at the University of California, Los Angeles (UCLA). In addition, he has been honoured with a number of awards, including the Pulitzer Prize in 2008, for his work “The Years of Extermination: Nazi Germany and the Jews, 1939–1945”.

Nobel Memorial Prize Laureate in Economic Sciences 1998 and Professor at Harvard University, Amartya Sen is the author of numerous books, which have been translated into more than 30 languages. His work has focused most notably on the causes of famine, inequality and poverty. The United Nations Development Programme (UNDP) human development index was developed in part based on his research.