Coherence or Contestation: Chinese, Japanese and Russian Approaches to the Transformation of Peacebuilding Practices

The phase I of this project is completed. Click here for phase II.

The field of International Relations has long been involved in the study of “normative transformation” – i.e. with the ways in which norms with universal ambitions, such as human rights, are “projected” onto states and there “internalized” by local actors. Much less is known, however, about how these interpretations are in turn fed back up to the global level. By focusing on understandings of peacebuilding in China, Japan and Russia, this project seeks to study the manner in which both top-down and bottom-up dynamics influence the nature, content, and direction of normative change. In doing so, it advances a new theoretical and methodological framework that seeks to offer an innovative contribution to contemporary scholarship on norm diffusion, the role of rising powers in global governance, and the (re)shaping of international order.

Mainstream peacebuilding scholarship, which is predominantly Anglophone and ideologically embedded in the “liberal peace” paradigm, pays little attention to peacebuilding practices undertaken by non-Western countries. This project seeks to critically compare and contrast the normative and practical underpinnings of what the project calls the “global peacebuilding order” by focusing specifically on the three case-study countries and their regional spheres of influence. Indeed, China has been increasingly involved in peacebuilding activities in Africa, Russia is active in the Caucasus and the Middle East, and Japan has recently undertaken a comprehensive reform in national security legislation which now allows the Japanese Self-Defense Force to take a more proactive role in UN peace operations. What is more, the three countries are also key players in contemporary security dynamics in Central and East Asia.

Initially funded for three years by the Swiss National Science Foundation (SNF) the project has been granted a cost-neutral extension of 7 months due to the operational challenges posed by the ongoing pandemic. In October 2021, the project team submitted an application for a follow-on SNSF project (results to be announced in March 2022).

The project also functioned as an effective mechanism of empowering young researchers. As a result, Post-doc Kobayashi has recently been appointed as an Associate Professor of Peace Studies at the College and Graduate School of International Relations at Ritsumeikan University in Kyoto (his new position will commence on 1 April 2022). Ph.D. candidate Yuan has an outstanding publication record for a doctoral student. 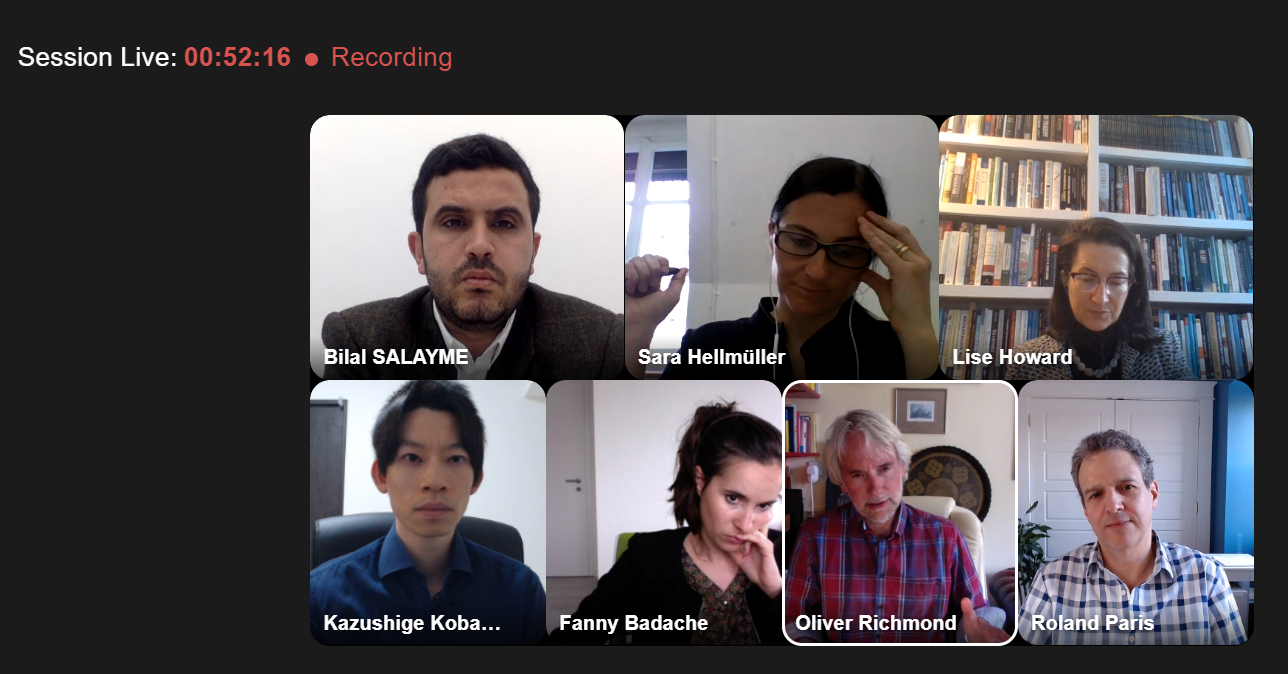 29 March 2022, Kazushige presenting at the ISA Annual Convention Virtual Panel “Shifts in the System of Global Governance and Peace” 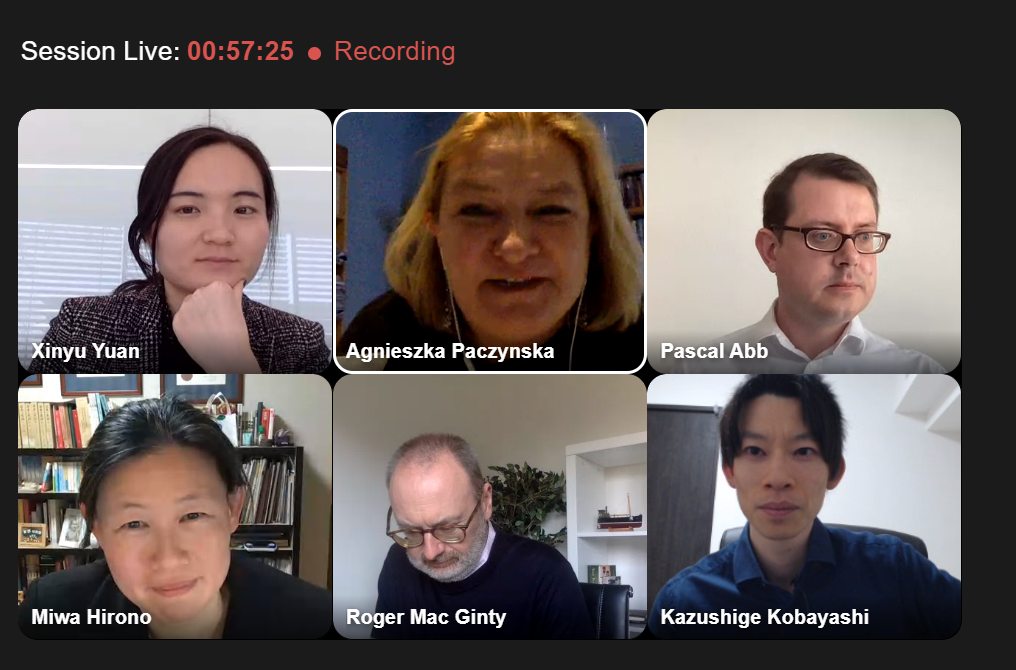 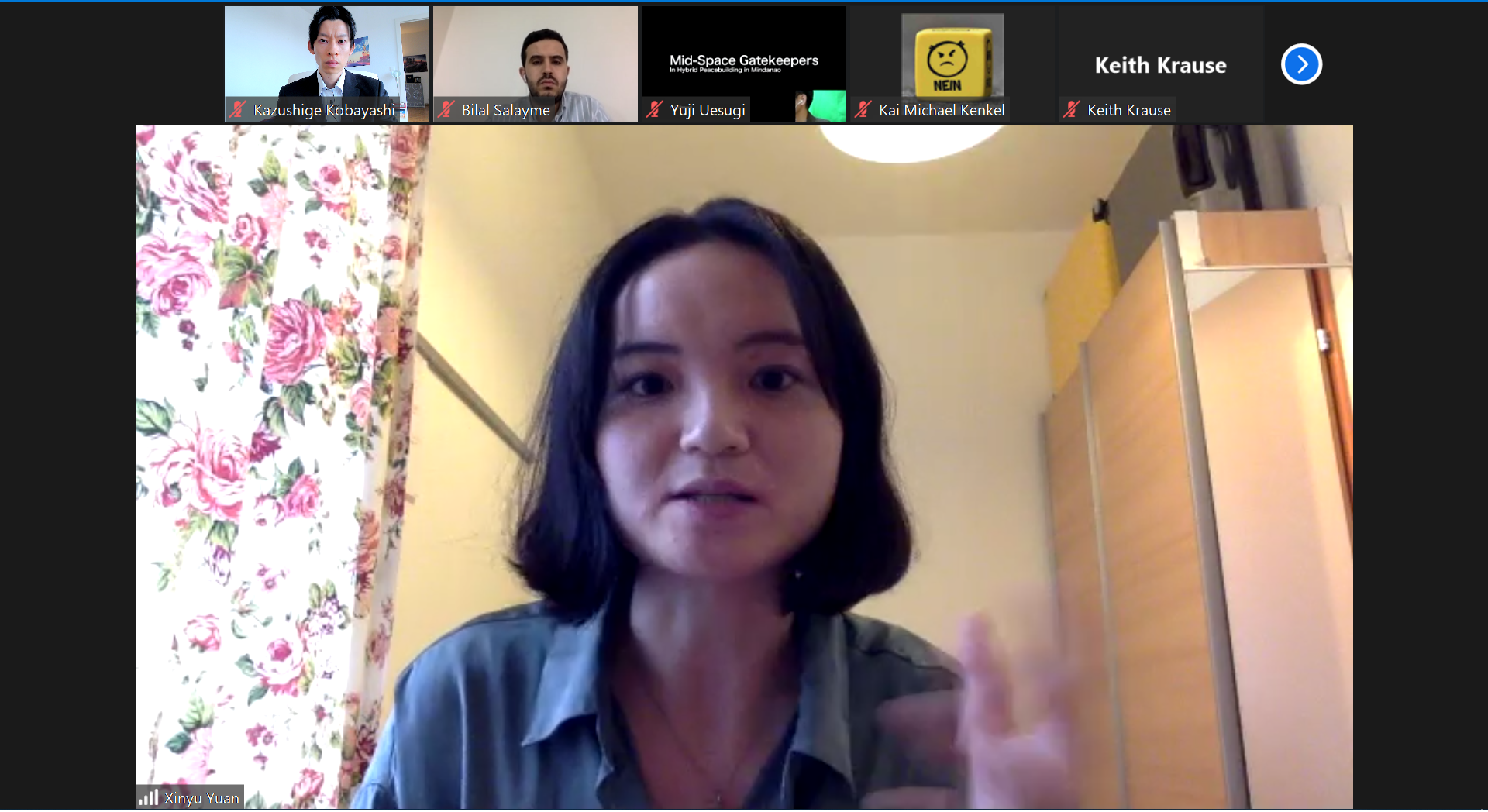 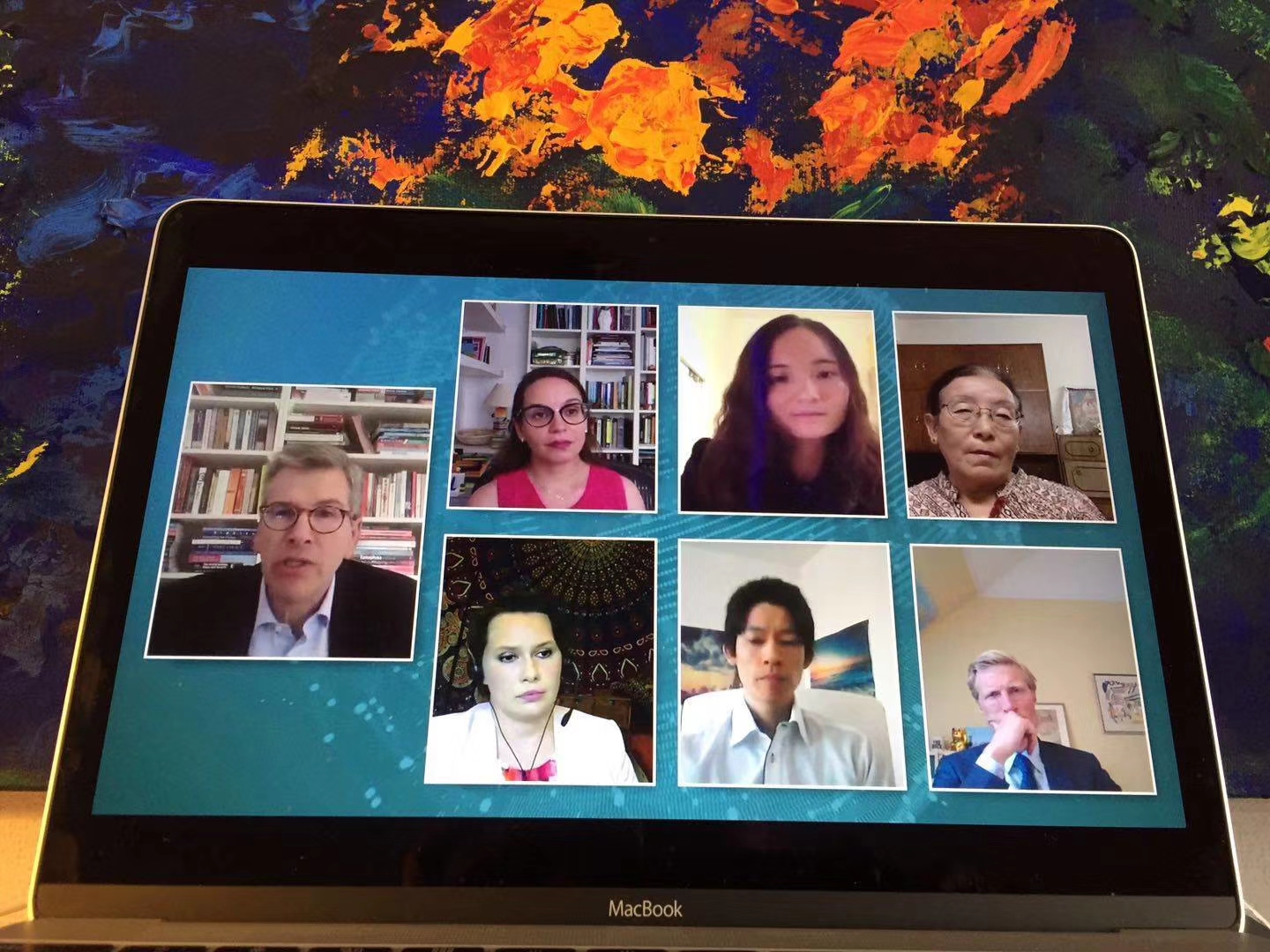 Stockholm Forum on Peace and Development 2020, Webinar with Kazushige Kobayashi and Xinyu Yuan 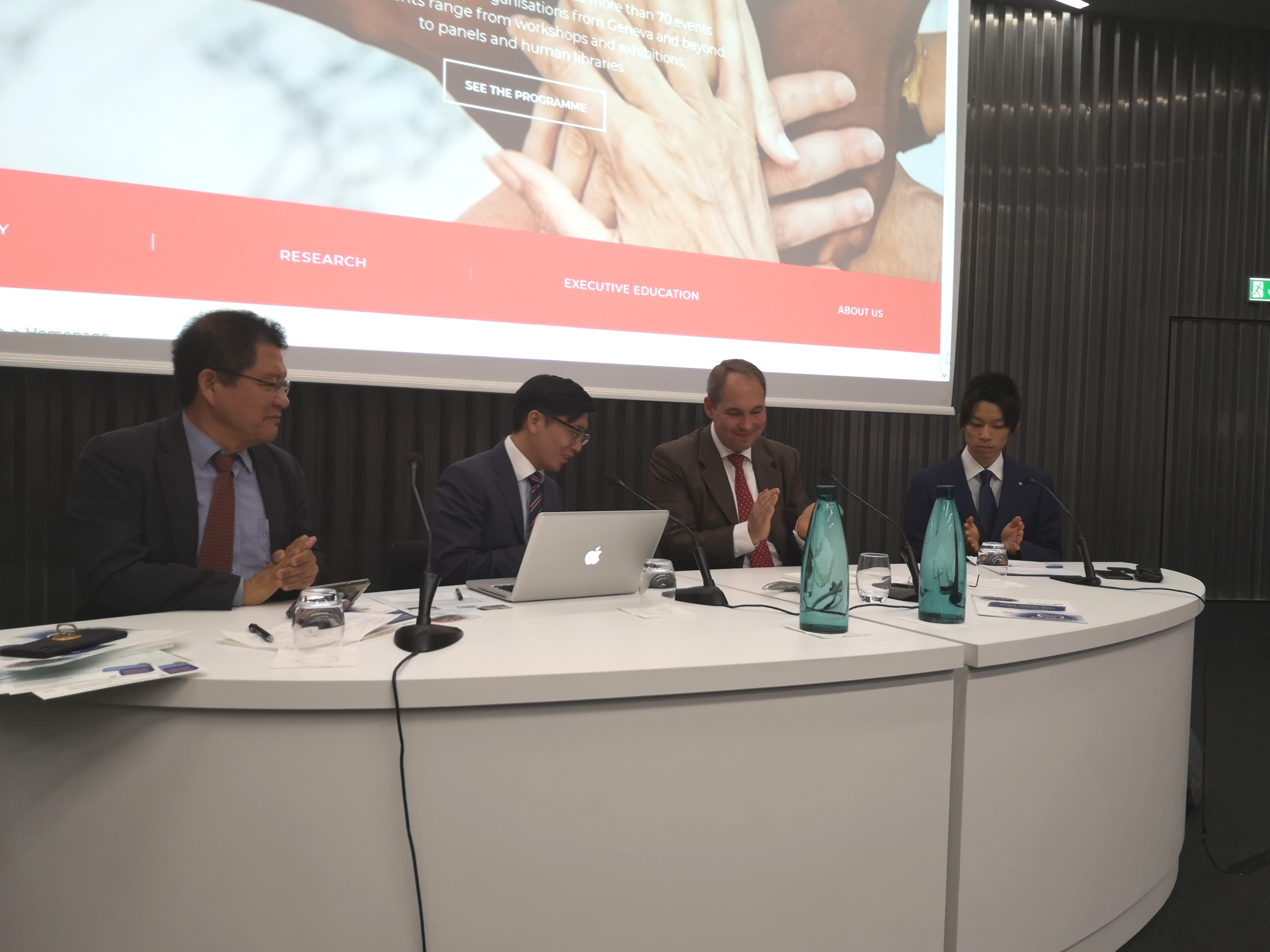 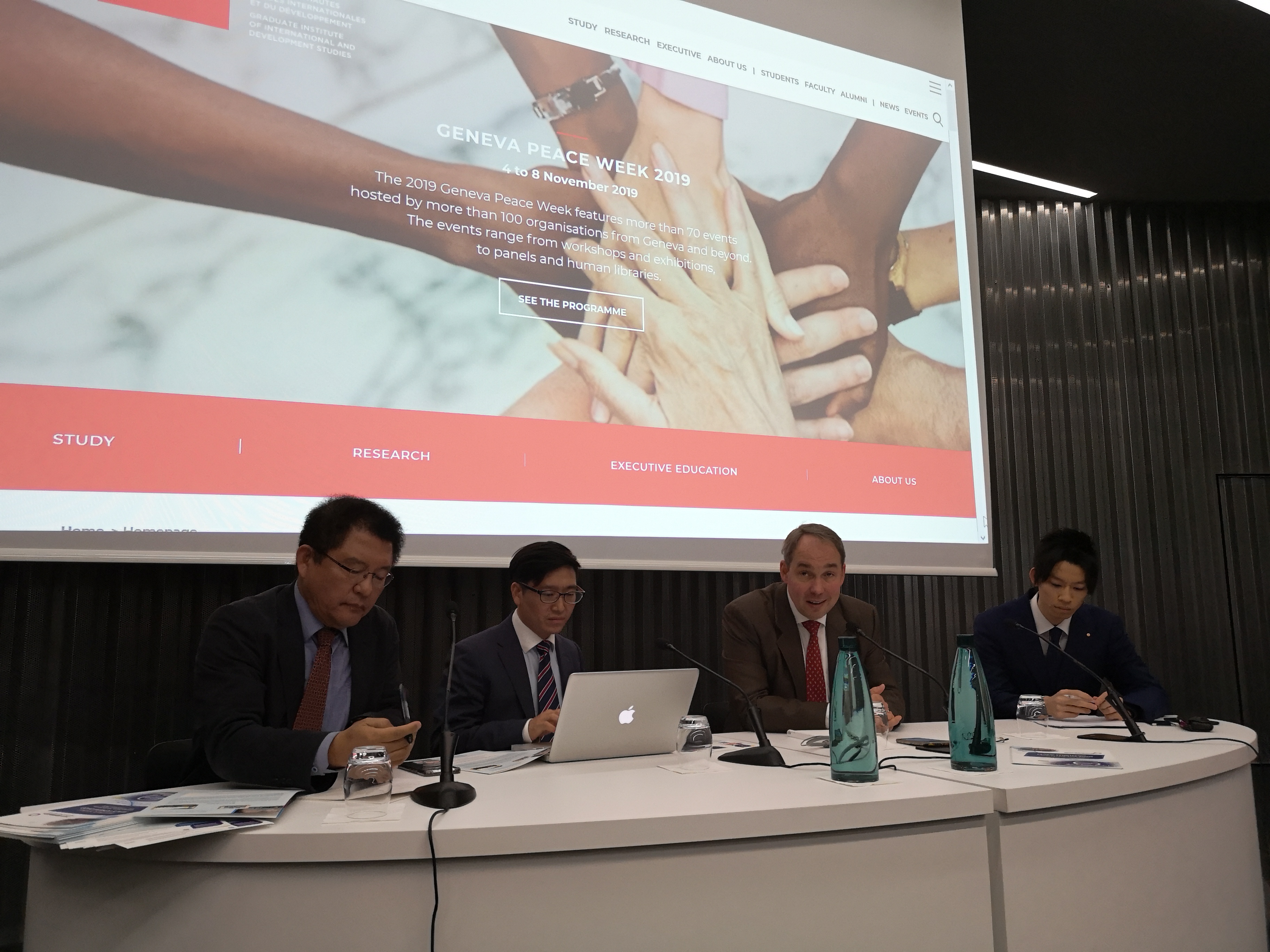 A part of the project's case studies on Chinese and Japanese peacebuilding policy is published as two open-access journal articles for the special issue section "East Asian Approaches to Peacebuilding" of Pathways to Peace and Security, Vol. 58, No. 1, 2020. Pathways to Peace and Security is a journal published by the Primakov Institute of World Economy and International Relations (IMEMO) of the Russian Academy of Sciences in Moscow.

In addition, the project has one article currently under review by a major IR journal (Yuan, revise & resubmit phase), which is expected to be published in 2022. Kobayashi's book chapter contribution on Japan-China development cooperation norms is also under review.

Event title: Who Are the New Peacebuilding Actors and What Do They Want? Stockholm Forum on Peace and Development 2020

Keith Krause presented a paper at the panel.

Organized by the project team.

21 January 2022, Norm Diffusion Beyond the West Webinar I, online.

Webinar organized by the Department of International Relations and European Studies of the Metropolitan University Prague and the Czech Science Foundation.

15-16 October 2021, Conference on Peace and Security in Times of Transition: Socialist and Post-Socialist States & Development of International Peacekeeping Since 1945. Moscow, Russia.

Organised by the project team.

Organized by the project team.

Session co-organized by the Center on Conflict, Development and Peacebuilding (CCDP), the University of Manchester, and Waseda University.

June-July, 2019, Beijing and Shanghai, China.
Xinyu conducted fieldwork in China. Here she attended the Peace Forum of China, 2019, in Beijing. Xinyu also attended the lecture given by former Chinese ambassador to South Africa.

22-24 May 2019, OECD Boulogne, Paris, France.
Xinyu and Keith made a presentation on China’s engagement in fragile and/or conflict-affected situations, at The Task Meeting of the International Network on Conflict and Fragility (INCAF) of the OECD Development Assistance Committee (DAC).