The politics of Nicaragua in the pandemic

The webinar on November 26, 2020 focused on Nicaragua, with the participation of Ilsen Canales (Political Analyst) and Elvira Cuadra (Cinco). 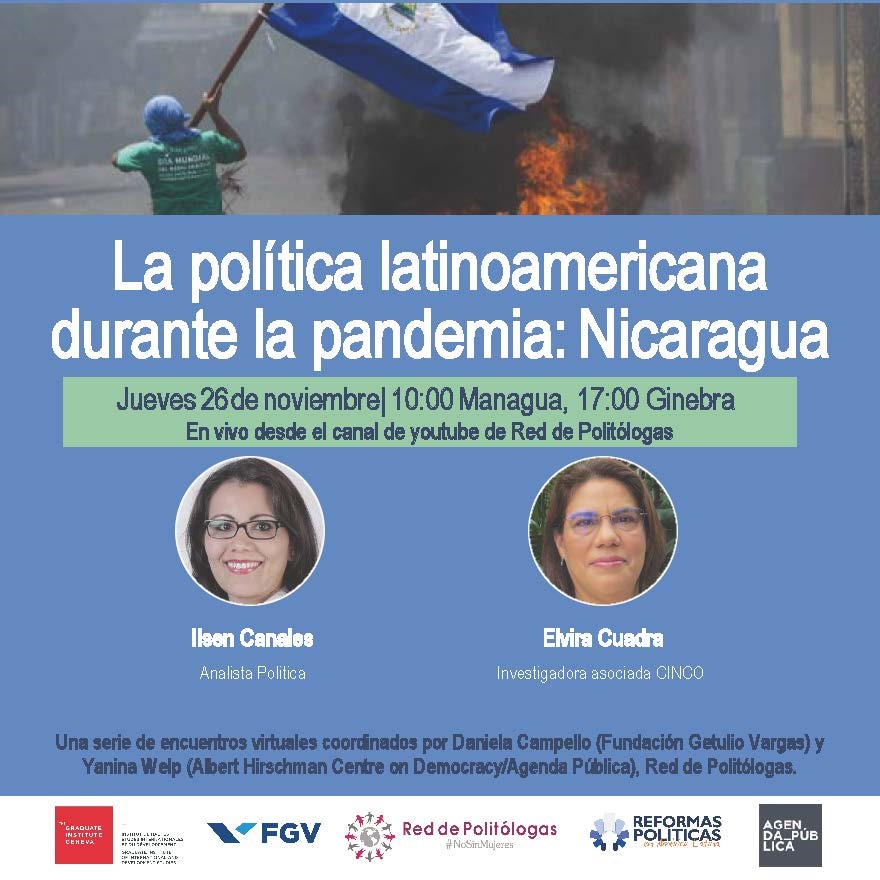 In April 2018, Nicaragua experienced a wave of social protests. Initially launched by students and civil society in Managua, they were quickly joined by farmers, who had been mobilized against the government’s policies for a few years. President Daniel Ortega (National Sandinist Liberation Front- FSLN) returned to power after winning the presidential elections in 2007; he however did not win with a significant majority of votes, and accordingly his government was weak. Repression was the strategy chosen by the executive to answer to citizens' demands and to the 2018 mobilizations: over 300 persons were killed by security forces and paramilitaries, and hundreds more were prosecuted and imprisoned. In answer to human rights violations, the United States applied sanctions against government officials but these did not change local political dynamics. The government proposed an Amnesty law without additional actions nor assuming responsibility. The COVID-19 pandemic thus arrived in a country that featured: a repressive state; a mobilized civil society; a weakened economy; and profound poverty and inequalities.

1. The government’s strategy to (not) face the pandemic: from denial to information control

Nicaragua is an exceptional case of the region not only because the government denied COVID-19’s importance (as Jair Bolsonaro in Brazil and Andrés Manuel López Obrador in Mexico) , but because Ortega went as far as to organize a public demonstration to celebrate life and ask God to protect the country. This exposed the population and as well as public servants (including health workers) who were forced to participate. The President and his wife, Vice-President Rosario Murillo, did not attend, though. During the first hit of the pandemic, hospitals were not properly equipped, and health workers were forbidden, under threat of fines, to use face masks. The argument was that these would scare the population. When neighbouring countries opted to close borders and Nicaragua saw a rise of deaths, a different strategy was adopted: controlling information and prosecuting the media outlets that sought to expose reality.

2. The strength of the civic movement

After 2018’s social movement and subsequent repression, civil society eventually organized around two main social platforms: the ‘Blue and White National Unit’ (Unidad Nacional Azul y Blanca) and the ‘Civic Alliance for Democracy” (Alianza Civica por la Democracia). These two platforms are diverse and heterogeneous movements in which even businessmen and members of the church participate. They aim to support vulnerable populations with material help (e.g. they distributed clothes and food to the affected population after the November 2020 hurricanes). They also aim to produce reliable information about the effects of the pandemic in the country. The citizen observatory for monitoring (observatorio ciudadano de monitoreo) and the Interdisciplinary Scientific Committee register statistical information for the World Health Organization and the Central American Health Platform. Such organizations survive despite the government’s repressive siege.

3. A window of opportunity to re-establish democracy: the 2021 general elections

Social movements are pushing for a national coalition against the Ortega-Murillo’s ticket in the next elections. Surveys are not trustworthy; however, they have estimated that the FSLN’s support only garner about 20% of the electorate. The government’s weakening popularity in recent years has led it to enforce more strength through the deployment of military groups and support from the army. The upcoming elections represent an opportunity but, with no electoral reform nor international observation, a fair electoral process might not be in the cards.

4. Years of economic recession and, now, the devastation produced by the hurricanes

The economy is strongly weakened by an ongoing recession. Insecurity and violence have affected tourism, small enterprises, and peasantry. Informal labour represents 70% of the economy. International credit bodies have denied financing to Nicaragua due to human rights abuses; however, they have accepted granting a 600 million-dollar credit to the country. Part of this credit would be managed by the government, which our analysts fear will be used in a clientelist and corrupt way, but ongoing negotiations suggest that another part will be directly managed by the agencies of the United Nations system.

5. The media and the flourishment of a public digital sphere

Media outlets are controlled by the government, but, in the last years, alternative digital platforms have been created within and outside Nicaragua. While those in the country face serious economic and political issues, their efforts continue. In turn, social media has fostered an enriching dialogue, building a strong public arena and feeding the idea of civic, democratic change in Nicaragua.

Link to the full event in Spanish here.